Can you “manipulate” a biological brain remotely without implanting a control device?

The latest research published in the journal Nature rushed to the hot search as soon as it was published:

Although the subject of this experiment is not humans but mice, many netizens’ first reaction is “too dangerous” and “a little anti-human”:

So is this really a particularly scary technology?

In fact, this research is mainly through certain technical means, using special light to irradiate the mouse’s head and turn on its “movement mode” – I can’t help but want to wander around.

It can be said to be real physical exercise (manual dog head).

Moreover, this technology is indeed a breakthrough.

According to Stanford University, this is the first time that scientists have successfully controlled the neural circuits of normal organisms remotely without invading the brain.

During the whole process, there was no implanted device and no damage to the scalp and skull of mice.

At the same time, it is not only a technical exploration, but also has certain application value in the treatment of nervous system diseases.

Let’s look at it in detail.

In fact, using light to control brain cells is a relatively mature research.

One of the most typical technologies is optogenetics, which has been rated by science as one of the “top 10 breakthrough research in the biological field” in the past decade, and even once predicted to be a Nobel Prize research achievement (awarded the “Nobel weathervane” Lasker Award).

Then, irradiating these cells with specific wavelength light can control the activation and closure of light sensitive proteins, so as to activate or inhibit neurons in the brain and achieve the purpose of “controlling brain cells”.

But, this technology has always had a defect——

An optical implant must be installed and an optical fiber tie must be inserted into the skull.

This is because optogenetics relies heavily on visible light, and the brain is opaque and cannot be penetrated by visible light. 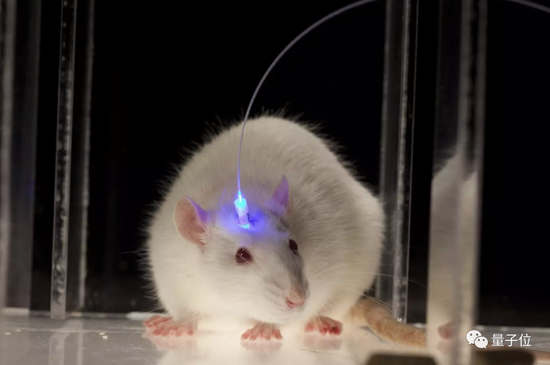 However, implanted devices will not only cause tissue damage, but also limit the free movement of organisms. It will become difficult to study the brain nerve activity under the natural behavior of organisms.

In the latest study, scientists finally succeeded in removing the implant device from the head of mice.

They found a kind of near-infrared light, that is, the near-infrared two-zone band of 1000-1700nm, which can maintain high penetration in highly scattered brain tissue.

How to control brain cells through optical signals without implanting optical devices?

This is to mention a protein called TRPV1 in organisms. Last year, the Nobel Prize in physiology or medicine was awarded to its discoverer.

Specifically, it is a capsaicin receptor, an ion channel protein that responds to heat and pain; Pain is very sensitive. 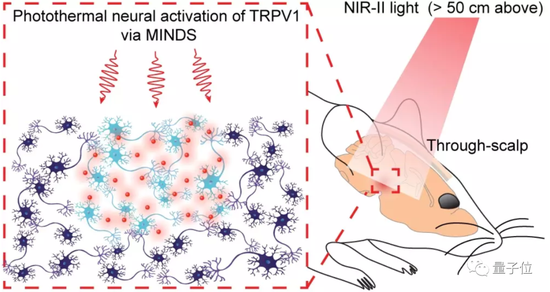 However, scientists implanted the heat sensitive molecule into mouse neurons and found that it had no effect on the thermal signal of near-infrared light because the photothermal signal was still too small.

Implantation here refers to the transfection of target neurons with adenovirus wrapped in TRPV1, that is, the introduction of DNA, RNA or protein into cells.

So they designed a “sensor” molecule called minds, which is specially used to absorb and amplify infrared light.

In this way, the principle design of the whole system is completed.

It is hoped to be used to treat nervous system diseases

The next step is to conduct further experiments to verify whether this theory is feasible.

Scientists first added TRPV1 channel to neurons on one side of the mouse cerebral motor cortex, then injected minds molecule, and finally observed the behavior of mice. 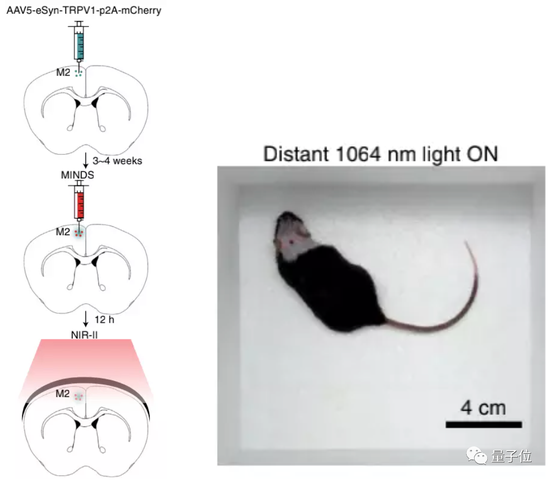 They were surprised to find that when the infrared light 1m above the fence was turned on, the mice that initially moved in a small range immediately began to circle, greatly increasing the range of activity. 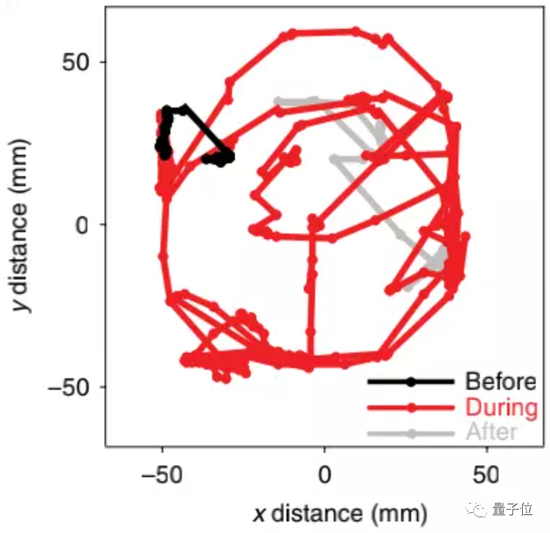 The mice in the control group did not have this response.

In other words, the stimulation of near-infrared light on brain motor cells in mice was effective.

They also injected the two molecules into dopamine expressing neurons in mice. Two days later, infrared light focusing devices were placed in the Y-maze of mice. 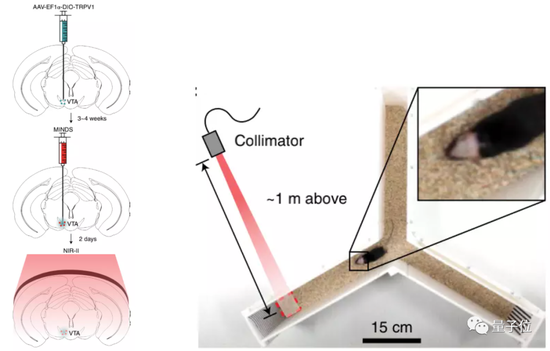 The results showed that mice were “addicted” to infrared light, which can stimulate dopamine neurons, and stayed under light for the longest time. 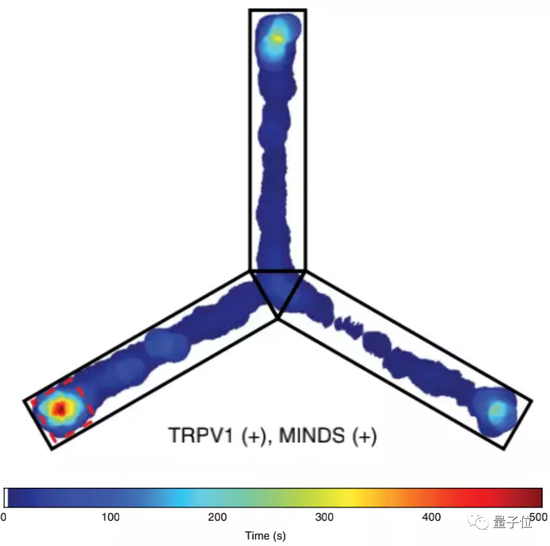 △  Different colors represent the residence time of mice, and red is the longest

According to Hong Guosong, the corresponding author of the paper, the purpose of this study is mainly to realize one of the biggest unmet needs in neuroscience through this non-invasive method——

In mice, the functions of specific brain cells and circuits deep in their brains were observed and recorded under free activities (such as social interaction).

Further, this method also contributes to a better understanding of the human cognitive system.

If this technology is finally mature, it can be used to regulate the specific neuronal circuits in the patient’s brain and treat some neurological diseases, such as epilepsy.

After carefully reading this study, some netizens suggested that these studies are not only very important research tools and methods to explore neuronal function, but also provide a very important basis for the study of the brain:

Some netizens hope it can be used in the treatment of more diseases, such as Alzheimer’s disease.

The research comes from the Chinese team

The research was carried out by the team of Hong Guosong from Stanford University and the team of Pu Kan from Nanyang University of technology in Singapore.

There are two in one work, one is Wu Xiang, a doctoral student from Stanford University, and the other is Jiang Yuyan from Nanyang University of technology.

The corresponding author is Hong Guosong, an assistant professor of the school of materials science and engineering of Stanford University and Wu Cai Institute of Neuroscience (renamed by Wu Minghua and Cai Chongxin). 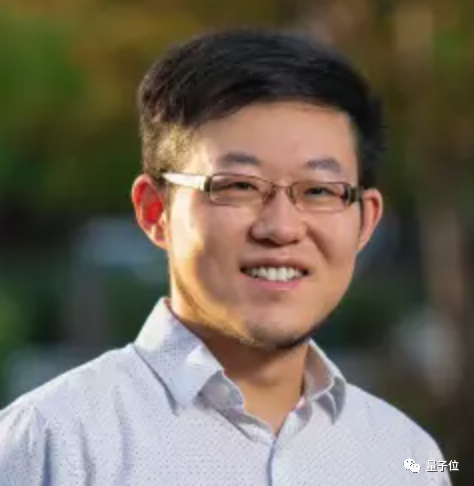 His research interests are polymer materials and biomaterials, including nanotechnology. The papers of the two corresponding authors are cited more than 20000 times. 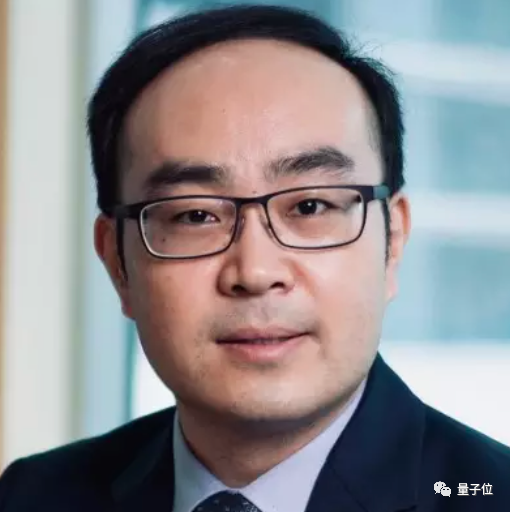 So, where do you want this research to be applied?