The problem of plastic waste is complex and severe. When you see the plastic fragments in the belly of turtles and the animal bones under the ghost fishing gear, this problem is even more shocking.

Many organizations are trying to reduce pollution. In addition to traditional solutions such as recycling, humans are surprised to find that they have microbial helpers around them – a small number of microorganisms have evolved the ability to “eat” some plastics and break down polymer plastics into small molecules. These micro “plastic eaters” will soon play a key role in reducing plastic waste and building a greener economy.

The disposal of plastic waste needs a revolution

According to the data of the European Plastics Association (PE), the global plastic production in 2020 was 367 million tons, slightly lower than 368 million tons in 2019, which may be due to the new crown pandemic. In fact, the plastic production has increased almost every year since the 1950s. A 2017 study estimated that humans have produced a total of 8.3 billion tons of plastic, equivalent to 1 billion elephants.

A6021 the volunteers in the picture are collecting plastic garbage on a beach in Lima, Peru

In addition to the dangers of plastics themselves, the large amount of additives contained in plastics that will seep into water is also worrying.

“Over time, we really don’t know what impact these situations will have,” said Tiffany M. Ramos of roskiller University in Denmark

After removing the part flowing into the ocean, most of the rest will eventually go to landfill. It doesn’t sound so bad, but know that there are a lot of disposable plastics – or plastics that “waste resources and affect the environment”.

The production of plastics requires the exploitation of fossil fuels such as oil from underground, which will bring all kinds of pollution risks and release greenhouse gases. A 2021 report pointed out that the plastics related industry in the United States alone produces 232 million tons of greenhouse gases a year, equivalent to the emissions of 116 coal-fired power plants.

The solution to the problem is not to completely stop using plastics, because they play a vital role in human production and life. Take a dialectical example: plastic bottles are much lighter than glass bottles, so transporting them consumes less energy and releases less greenhouse gases.

But in any case, we need to carry out a revolution around the treatment of plastic waste, and the “plastic eating” microorganisms mentioned above are the core of this revolution.

It began with the discovery of hydrolase in the garbage

In 2016, a research team led by Kohei ODA, a microbiologist at Kyoto University of technology and fiber in Japan, reported a gratifying discovery: a bacterium that feeds on PET plastic debris and named it ideonella sakaiensis.

The full name of pet, which is often used in electrical appliances, packaging, textiles and other fields, is polyethylene terephthalate. Like most plastics, it is a long-chain polymer material polymerized by countless small molecular units.

Each pair of adjacent units in the chain are bound by firm covalent bonds, like a chain iron rope; Chains attract each other with complex intermolecular forces, just like countless iron chains intertwined with each other. Therefore, pet plastic is difficult to degrade and has long-lasting and lasting properties – human beings “liked it when they used it, but now they are tired of it when they use it”. (refer to our attitude towards mineral water bottles and plastic bags.)

Kota’s team collected sediment and wastewater samples contaminated by PET and screened them to find microorganisms that can grow on plastic. Finally, it found ideonella sakaiensis 201-f6, a new bacterial strain. They can grow on pet fragments and use pet as the main source of nutrition – that is, they can degrade it efficiently.

The former is responsible for the decomposition of long-chain molecules of long pet into small molecules mhet, i.e. monoethylene terephthalate; The latter then hydrolyzes mhet to ethylene glycol and terephthalic acid. Pet is synthesized and polycondensated from ethylene glycol and terephthalic acid, and the whole hydrolysis process is equivalent to the reverse version of pet manufacturing process. Looking for traces of microbial plastic eaters in history

The new discovery quickly made headlines around the world, but it was not the first example of organic life degrading plastics.

Reports of microbial plastic eaters date back at least to the early 1990s. Of course, the pioneers of plastic eating did not gain favor because they could only eat plastics that were chemically unstable or inherently biodegradable.

By the beginning of the 21st century, researchers had discovered enzymes that could digest harder plastics. A team led by Wolfgang & nbsp; Zimmermann, an outstanding scholar in the field and from the University of Leipzig, studied a microbial enzyme called keratinase – derived from some bacteria with the ability to decompose pet, including thermobifida cellosilytica.

In 2012, Lars & nbsp; blank of Aachen University of technology in Germany set out to create a union of scientists to study the “de plasticizing” enzyme after hearing the story of keratinase and its creator for the first time. This led to the p4sb project from 2015 to 2019 (“using Pseudomonas putida to turn plastic waste into treasure”, funded by the European Union). Blanker then established a project called mix-up, in which European and Chinese scientists worked together.

By the mid-1980s, scientists had known many enzymes that could degrade plastics.

Gabriella & nbsp; Caruso is well aware of the potential of such enzymes. In a comment published in 2015, he wrote: “the microbial degradation of plastics is a promising environmental protection strategy, which provides a good way to deal with plastic waste without negative consequences.”

So since the academic community has long known their potential, why will ideonella sakaiensis 201-f6 cause such a sensation?

In the words of John mcgeehan, a professor at the University of Portsmouth in the UK: “compared with its predecessors, this new plastic eating star can use plastic as its only source of energy and food. This is very surprising and shows the role of evolutionary pressure – if you are the first bacterium in the garbage pile to suddenly like plastic, you will have unlimited food sources.” In other words, the previously discovered enzymes did not evolve around plastics, and their degradation ability is more like a by-product, while ideonella sakaiensis & nbsp; The enzyme of 201-f6 is very targeted.

However, Blanc believes that ideanella sakaiensis & nbsp; 201-f6 enzymes are not top-notch because they can only degrade pet slowly. “Wolfgang Zimmerman found a much better enzyme at that time, but the excitement caused by this new paper had a huge impact.”

In 2018, maijihan and colleagues went further, characterized the three-dimensional structure of pet hydrolase of ideonella sakaiensis 201-f6, clarified its working principle, and improved the degradation efficiency of the enzyme by adjusting the structure.

Next, megihan continued to make breakthroughs, trying to modify the “plasticizing” enzymes, including pet hydrolases, so that they can degrade the plastics that would have been left in the environment on an industrial scale. “We received a huge grant of £ 6 million from the government. Then we established a professional organization called the enzyme innovation center.”

The huge amount of funding has turned into some fruitful results.

In 2020, the mcgihan team reported that they had successfully linked pet hydrolase and mhet hydrolase to obtain a “super enzyme”, which ate pet about six times faster than when the two enzymes worked separately.

At the same time, other teams, such as Blanc’s mix-up project, have also produced improved versions of the enzyme. 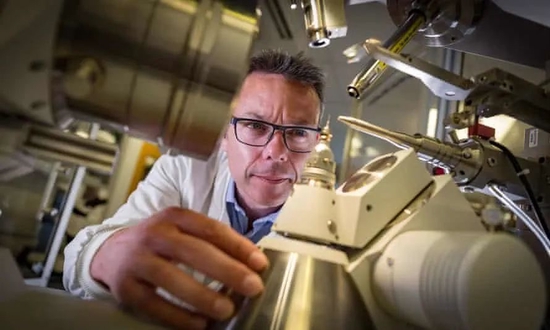 Professor John mcguihan, director of the enzyme Innovation Center at the University of Portsmouth

On the other hand, there is evidence that microorganisms around the world are evolving similar abilities.

A study published in October 2021 pointed out that microorganisms in areas with high plastic pollution are more likely to produce enzymes with the potential of plastic hydrolysis.

Another 2020 study identified a soil bacterium that feeds on certain components of polyurethane.

(toxic chemicals will be released when polyurethane decomposes).

Now the question becomes – how much can these enzymes do to reduce plastic pollution?

So far, most of the work has been carried out in Colleges and universities, but some groups are trying to commercialize the cutting-edge technology of microbial eating plastics.

The University of Portsmouth has established the “Revolution & nbsp; plastics” project, which aims to build a bridge between academia and industry.

“We have promoted the joint doctoral program with Coca Cola,” mcgihan said

Mcguihan is also a member of an international research team called bottom, which is committed to developing new technologies for plastic recycling and upgrading, and is currently negotiating with large enterprises.

At present, the leading commercialization project is led and operated by the French biotechnology company carbios.

In September 2021, carbios opened a pilot plant in the city of Clermont Ferrand in south central France, where it plans to test the system of recycling PET. The enzymes used in the recycling system were first found in composting and were modified by the technical team to make it run faster and work at high temperatures (which soften PET).

The advantage of these enzymes is that they break down plastics at the molecular level, so they can recreate the highest quality plastics. In contrast, other forms of recycling lead to a slow decline in the quality of plastics until they can no longer be recycled and can only be landfilled or incinerated.

At least in theory, enzymatic cycle / recovery can be called a real cycle.

In Ramos’s words: “this is what we call a closed-loop recycling system. You recycle something old and use it to make new products of the same quality – so far, only a small part of plastic has been recycled in this way, but enzymes can change that.” 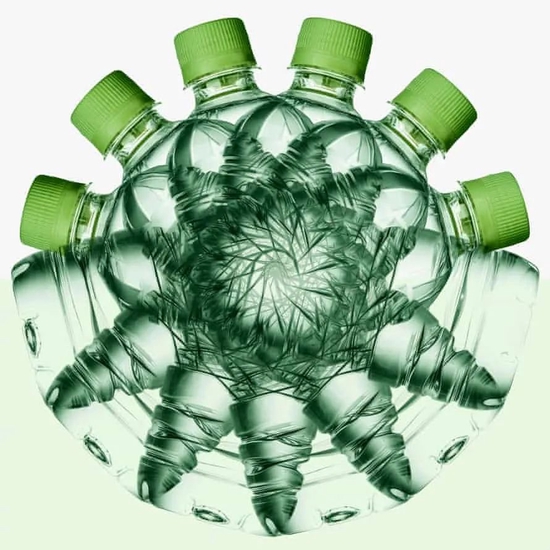 circular economy recycles everything as much as possible

“I think we will see demonstration plants in many places in the next five years,” mcgihan said

However, we must also know that the use of enzymes is limited after all. In Ramos’s words: “it will never be a universal solution. We shouldn’t expect enzymes to clean up all plastic waste. Some plastics are even stronger than pet.”

Blanc points out that if the plastic can be softened by heating first, the effect of enzyme will be the best. This also means that when the enzyme is in a conventional environment, it is difficult to really function. Only in a temperature controlled reactor can efficient plastic degradation be achieved. Therefore, the solution of marine plastics still needs to start with reducing the generation of waste.

These super enzymes can play an important role in circular economy, but the key is that we know where, how and to what extent to use them.

It is worth mentioning that in a study published in July 2021, mcgihan and colleagues estimated the cost of pet enzymatic cycle system. The results showed that using PET produced by enzyme cycle can be compared with pet derived from traditional fossil fuels in terms of cost.

In Ramos’s eyes, the enzyme of plastic decomposition must eventually become a part of human plastic revolution, but it is only a part. Equally important, plastic products are designed to be easy to reuse and recycle – which may mean avoiding designs that use multiple plastics or integrate plastics with other materials because composites are difficult to recycle.