Why can processes that occur in nature only develop in one direction? For example, why can’t we heat a cup of coffee in the fridge or stop a drop of ink from spreading spontaneously in the water?

This is a problem that puzzles many generations of physicists. It stems from the incompatibility of physical laws, especially those governing the behavior of macro and micro systems. Macroscopic systems can be seen with the naked eye. They are composed of a large number of atoms and molecules. Microsystems represent a very different world, which we can’t see, but the behavior of each atom or molecule can be described.

For example, liquids have lower order than crystals, while gases have lower order. Hotter or more dispersed matter has a higher entropy. In short, entropy always increases, and the system will always become more disordered in the spontaneous process. Unless we provide energy, they cannot go back.

However, when observing the individual atoms and molecules that make up the micro system, there is a different set of physical laws. But they do not explain the direction in which the process in this system must go.

Matter and process are the same, but the results may be contradictory when studied from the macro and micro perspectives. This is clearly a problem.

Recently, in a new paper, physicists Emil roduner and tjaart Kr ü ger think they have found a way to solve this problem. The key to the answer is to distinguish between two types of reversibility: time reversibility and thermodynamic reversibility.

We can imagine an ideal pendulum. It can swing back and forth without friction. If this movement is recorded and then inverted, it doesn’t seem to make any difference. This is a time reversible process. The motion of the pendulum is symmetrical in time inversion (i.e. time reversal).

However, the heat lost from a cup of hot coffee will never flow back. Heat inevitably flows from hot coffee into cooler air. When the coffee has the same temperature as the surrounding air, the heat flow stops. This final state is called equilibrium. Because it can’t be reversed like a pendulum, the process is irreversible. If you rewind its video, it looks very unnatural. The direction of this spontaneous process that eventually reaches equilibrium is the famous arrow of time.

Gradients dominate the course of events in small and large systems. The earth receives radiant energy from the sun’s hot surface and dissipates it into the cold background of the universe at a lower temperature. Life processes, including plants, animals and humans, as well as other organisms, are also driven by gradients. Their energy sources can eventually be traced back to the tiny packets of light from the sun – photons. All living things dissipate energy in the form of cooler photons, which will eventually be released into outer space.

The two physicists believe that the essence of the current problem is that we usually default that thermodynamic irreversibility and time irreversibility have the same probabilistic origin, which is true in many cases, but not necessarily so. The two reversibilities are essentially different.

Time reversibility has nothing to do with entropy gradient. In short, it’s about “memory”. If all molecules can “remember” their position and speed at each time point, so that the motion of each molecule can be reversed and restored to the initial state, then the process is time reversible. If a system is not particularly large, this process can already be simulated by modern computers. With the development of computer technology, more and more large and complex systems can be described at the single atomic and molecular level.

In other words, the obvious incompatibility between micro and macro systems is not related to the size of the system, but to the type of process and whether the process erases the “memory” of molecules. 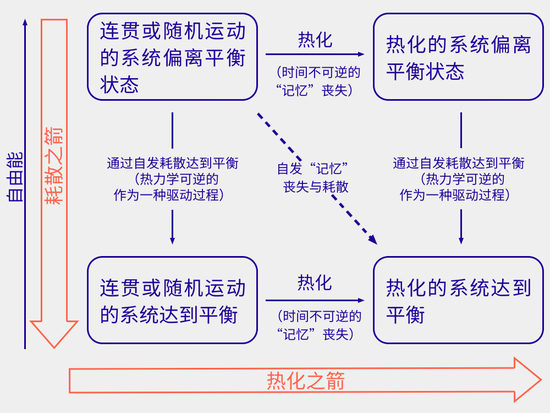 The two types of reversibility are essentially different. The arrow of time can be divided into a dissipative arrow reaching thermal equilibrium and a thermal arrow leading to the loss of reversibility of time| Reference source: roduner & amp; Krüger （2022）

In the case of heat (or more broadly, energy), the amount of energy used to synthesize a sugar molecule is released when the molecule fuels a process in our body and decays into its original constituent molecules. This is a thermodynamic point of view, but it ignores the aspect of time.

If it takes five minutes to synthesize a molecule, that doesn’t mean the molecule will decay after five minutes. We cannot predict the exact time of molecular decay because the decay process is dominated by a certain probability per unit time. Moreover, it is important that probabilistic processes are never time reversible because they do not contain memory of earlier states. The complete description of the probabilistic process needs to consider both energy and time.

The two physicists believe that the smooth transition of these two types of irreversibility will pave the way for a unified theory that can describe all material states and processes based on a single set of principles. This is exactly what scientists expect.