Developed by the scientific research team of Harbin Engineering University

In the “Challenger” abyss of the Mariana Trench

From October to November, as the leading unit of the national key R & D program of the Ministry of science and technology, the project team of “Research on Key Technologies of all sea deep unmanned submersible AUV” of Harbin Engineering University, together with the “Wukong” all sea deep AUV, fought in the Mariana Trench again after setting the Asian deep diving record of 7709 ⽶ at the beginning of the year, and completed four dives exceeding 10000 meters – 10009 meters, 10888 meters 10872m and 10896m, surpassing the AUV diving depth world record of 10028 ⽶ set by foreign unmanned underwater vehicle AUV in May 2020, and successfully completed the sea trial acceptance. 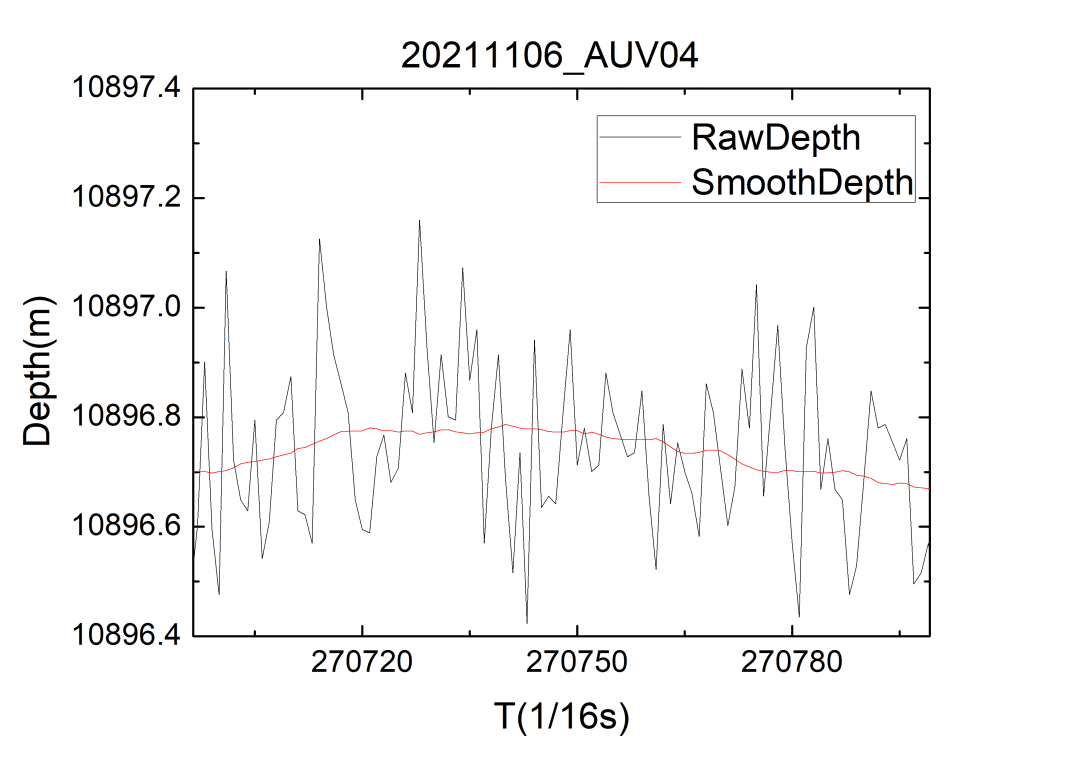 Uncover the mystery of 10000 meters of the seabed

Independent and free travel in the deep sea

Explore the infinite mysteries of the seabed

At the bottom of 10000 meters, the Wukong AUV collected very precious images and videos of the abyss seabed. During the navigation detection at a fixed height of 1 ~ 2m near the seabed, the “Wukong” underwater camera captured human scientific research traces such as suspected submersible drag marks. 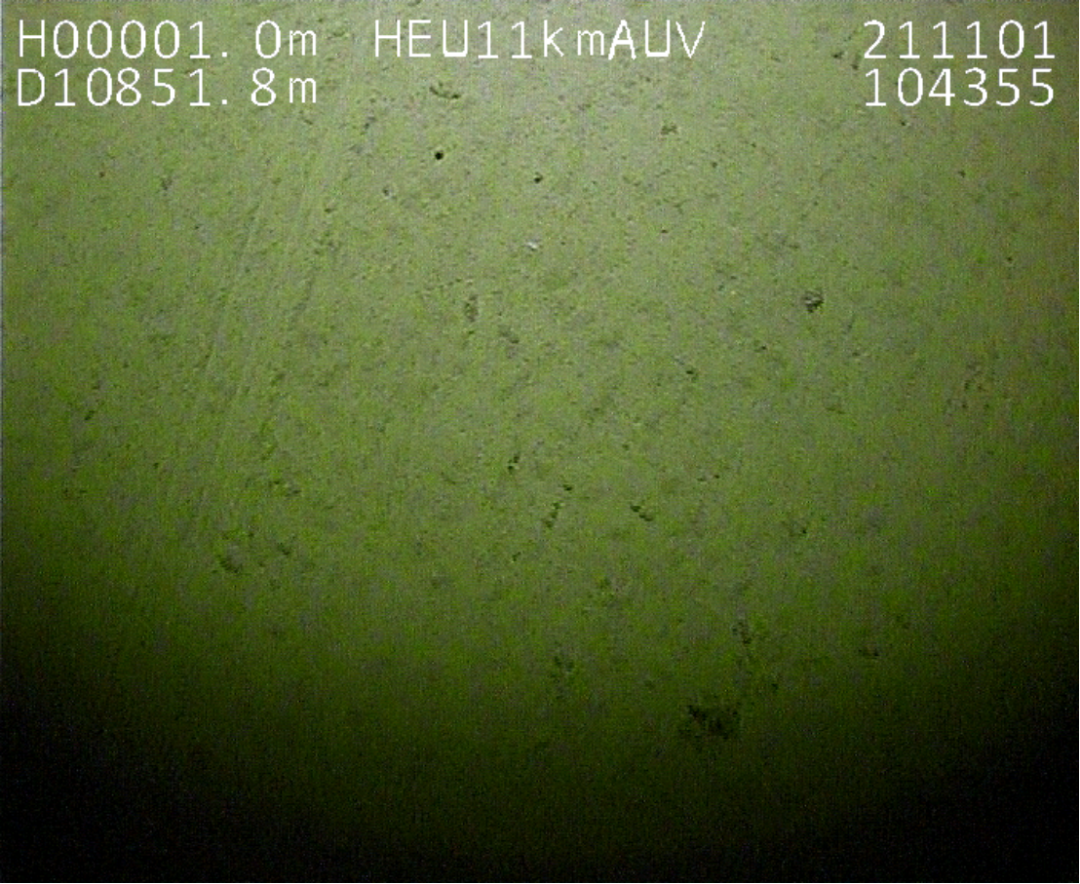 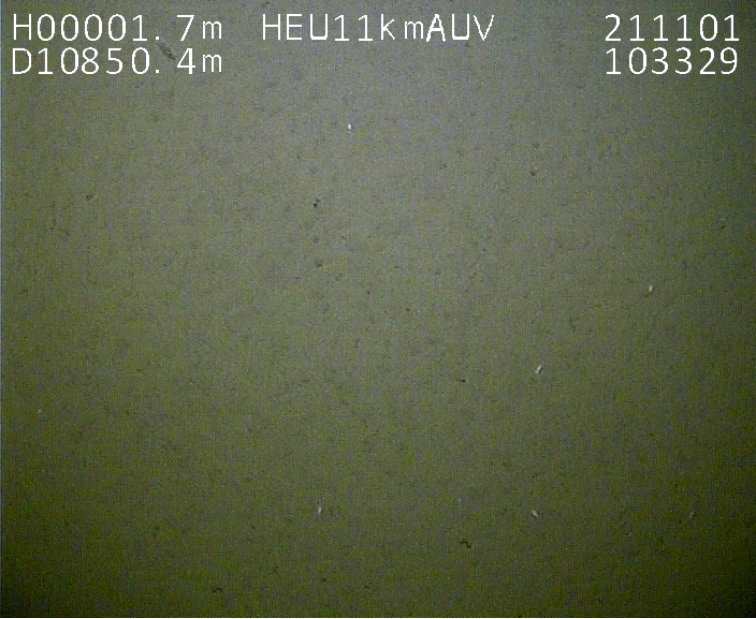 Benthos – white strips in the picture

AUV waiting to be recovered on the sea 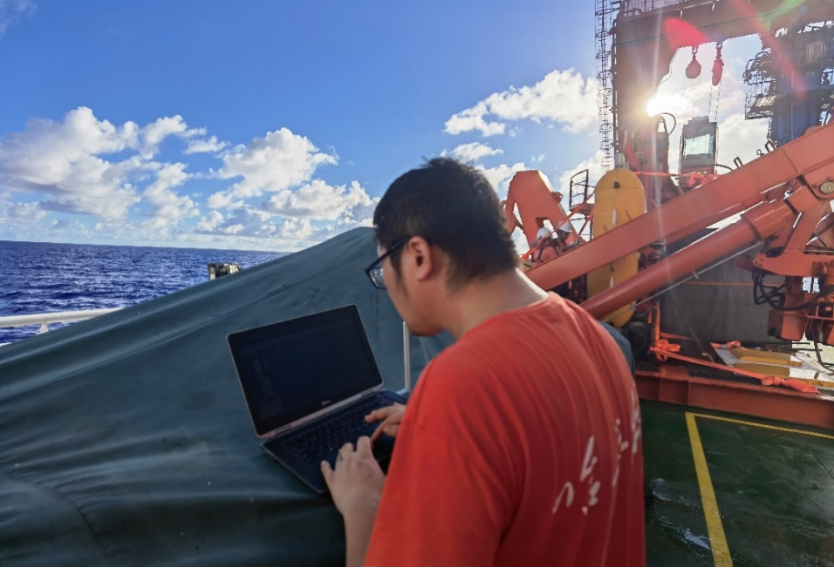 Through the assessment and test of the on-site expert group of the sea trial, it is confirmed that the relevant indicators of the assignment have met the acceptance requirements and passed the sea trial acceptance.

The brave fight against the wind and waves

On the afternoon of October 25, accompanied by overcast rain, Associate Professor Cao Jian pulled out the cable release pin, and the “Wukong” AUV successfully entered the water to perform its first dive mission. 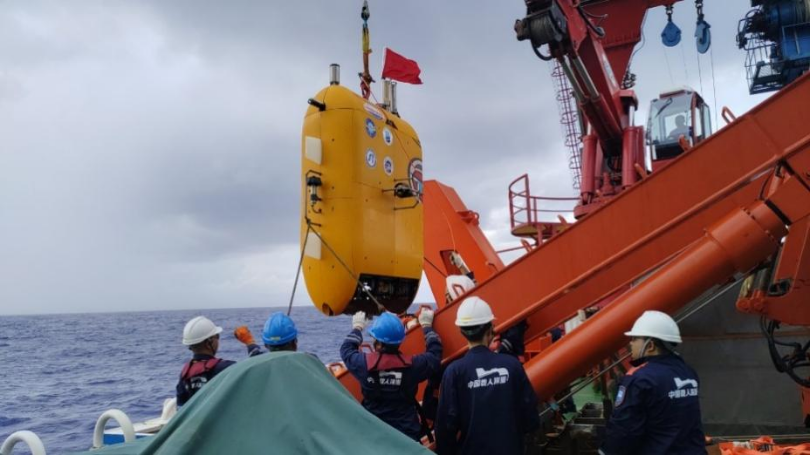 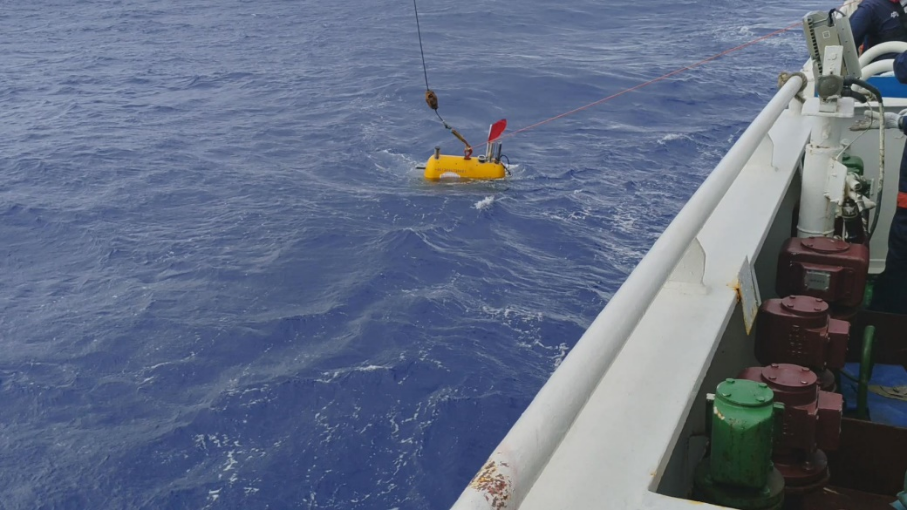 On the bridge, Associate Professor Li Yueming always pays attention to the position and depth of the Wukong AUV through the all sea deep USBL developed by our university. Cao Jian, Zhang Wenbo, Ji Xiaofeng and the personnel of the experimental department set up the sonar hanging array and established the underwater acoustic communication link.

After two and a half hours of waiting, USBL tracking showed that the depth of AUV was no longer increased, and the depth of information uploaded by underwater acoustic communication was more than 10000 meters, indicating that Wukong had reached 10000 meters deep sea, and all relevant systems were working normally.

At more than 9 p.m., the dark Western Pacific Ocean shrouded in mist was choppy. Four members of Kazakhstan’s engineering and scientific research team stared at the dark sea and anxiously looked for the figure of the “Wukong” which had completed its first dive of 10009 meters.

In order to find the light spot of the “Wukong” AUV strobe light, the captain turned off the light on the bridge, and everyone’s heartbeat and the sound of the waves were particularly clear.

Finally, a faint light burst out of the sea, and Wukong came back! Associate Professor Li Yueming first discovered the “Wukong”, the first submarine to triumph. When it floated up to 100 meters underwater, it automatically turned on the underwater light, which lit up the dark sea like a blooming white lotus.

The eagerness of team members turned into the ecstasy of success. For this hard won moment, we have waited too long and paid too much.

Facing the dark night and the 2.5-meter-high waves, Cao Jianke was frightened. He put on his life jacket and took a small boat to meet the “Wukong” returning late at night, and hung the “hook of life” for it to return to its mother ship. 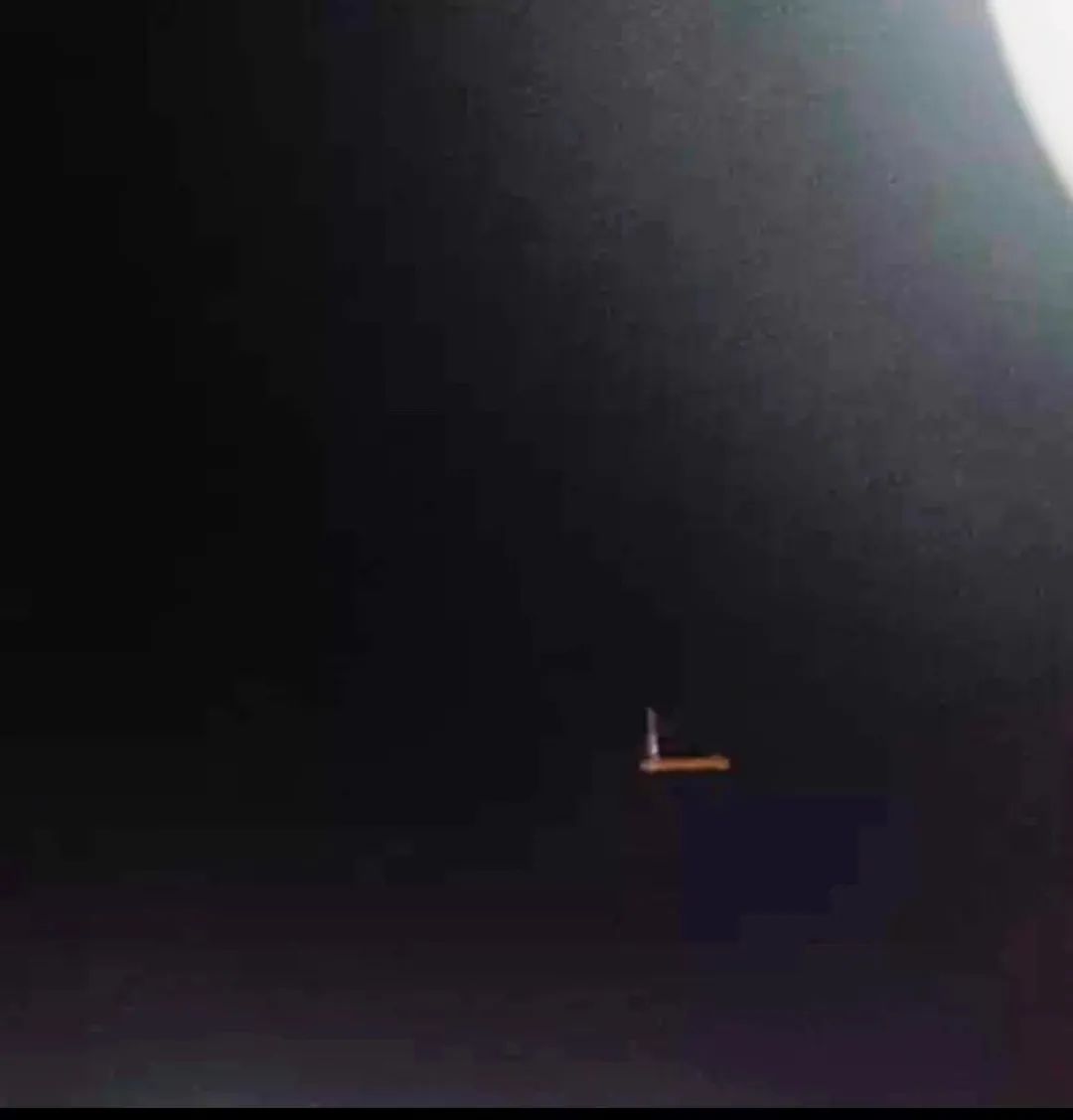 AUV waiting for recovery at night

With their skilled recycling skills, the team members overcame the waves and the night. After successfully recovering the Wukong AUV, they immediately carried out a series of work, such as flushing and cleaning, downloading data and checking the system. When everyone finished work, it was 1:00 a.m. on the 26th.

The Wukong AUV equipped with a high-speed underwater acoustic communication system can still accurately transmit status information to the scientific research team on the mother ship in the deep sea with a straight-line distance of more than 15 kilometers from the mother ship during its 10000 meter undersea swim. The measured uplink peak communication rate is 2003kbps, and the accuracy of data packet reception is more than 93%. 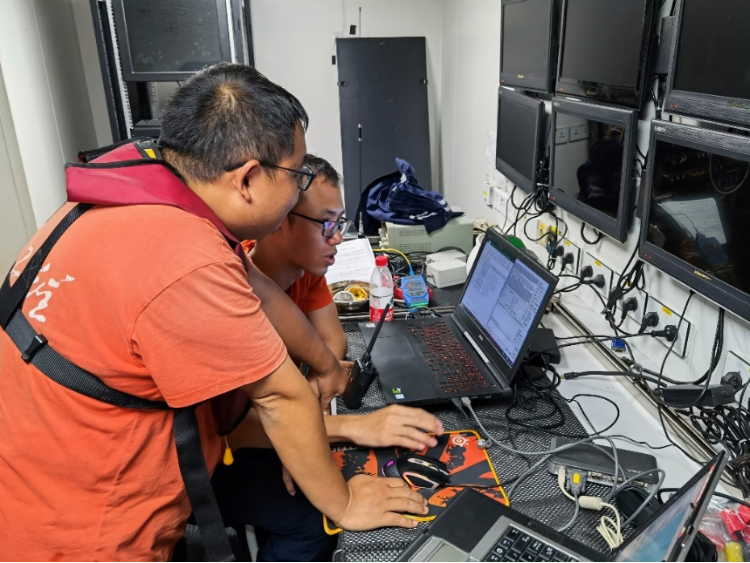 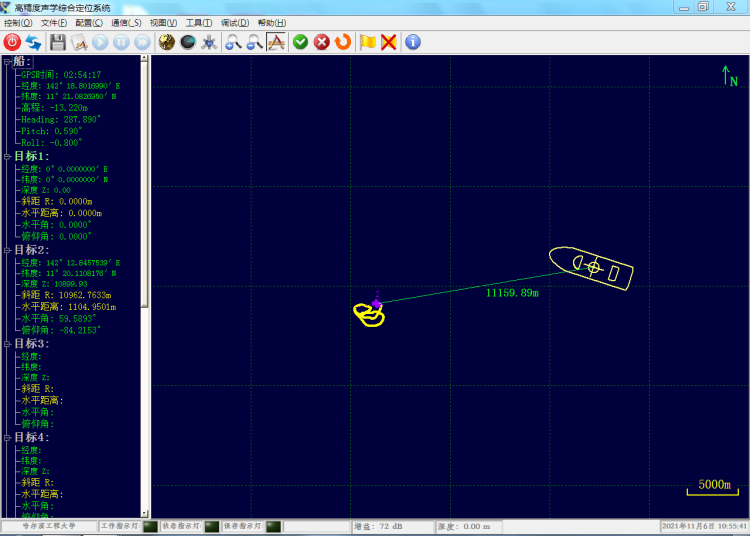 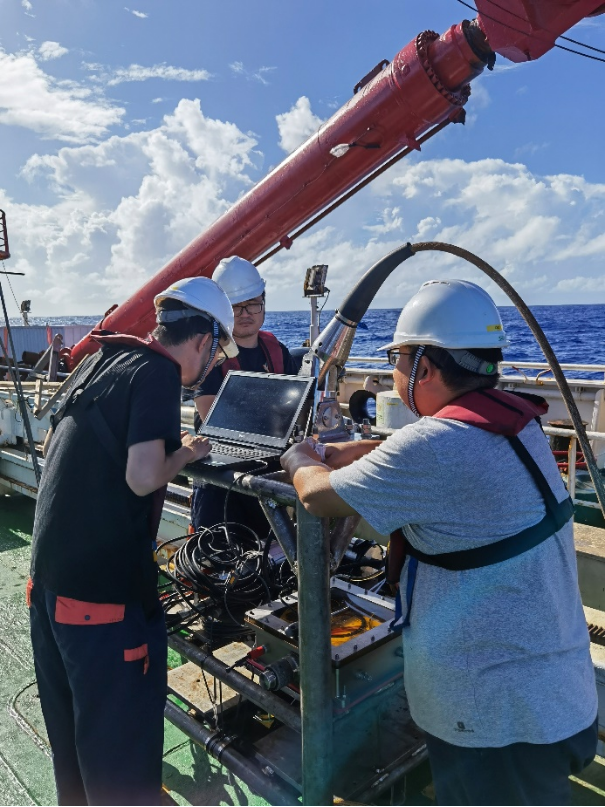 Behind the independence of “Wukong” to swim under the sea is the result of team members’ perseverance, excellence and joint efforts. In order to ensure that the Wukong dived on time the next day and realized long-distance high-speed underwater acoustic communication, Zhang Wenbo and Ji Xiaofeng improved and upgraded the software and hardware of the sonar array electronic cabin all night.

Overcome all difficulties and go to the deep sea

Under the influence of the epidemic situation and the fact that the national medical research ship has never been allowed to enter the Mariana Trench by the foreign party, the “Wukong” AUV project team is still making unremitting efforts to go to the ocean. When the team members went to Sanya for 10000 meter ultra-high pressure environmental pressure test, the project team received the good news that made everyone overjoyed. The “exploration No. 1” scientific research ship was finally approved to enter the abyss of the “Challenger” in the Mariana Trench to carry out scientific research. However, the boarding quota is only 4, which means that 4 people will complete the whole process of the whole AUV, and the maturity and engineering level of the AUV will also be challenged. After intense preparations for the voyage, the four team members successfully boarded the “exploration No. 1” scientific research ship heading for the Mariana Trench.

The research on unmanned and cableless submarine technology is the traditional advantageous scientific research direction of Harbin Engineering University. As the achievement of the national key R & D plan project during the 13th Five Year Plan period, the “Wukong” all sea deep AUV reposes the glory and dream of the Harbin Engineering scientific research team of “being willing to cast a sword and not afraid of the deep and far ocean”. We overcome the difficulties brought by the repeated epidemic situation to the sea trial acceptance of the project, Facing all kinds of pressure, we finally fulfilled our mission and trust, leaving China’s mark on the deepest seabed of the world. 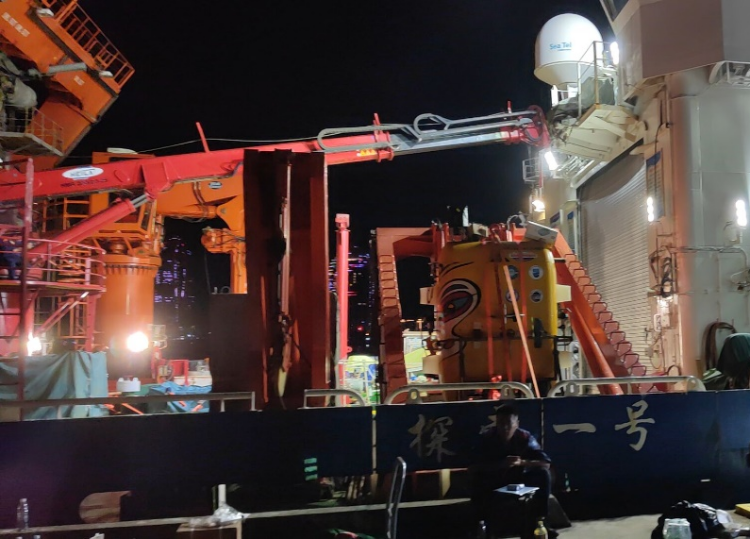 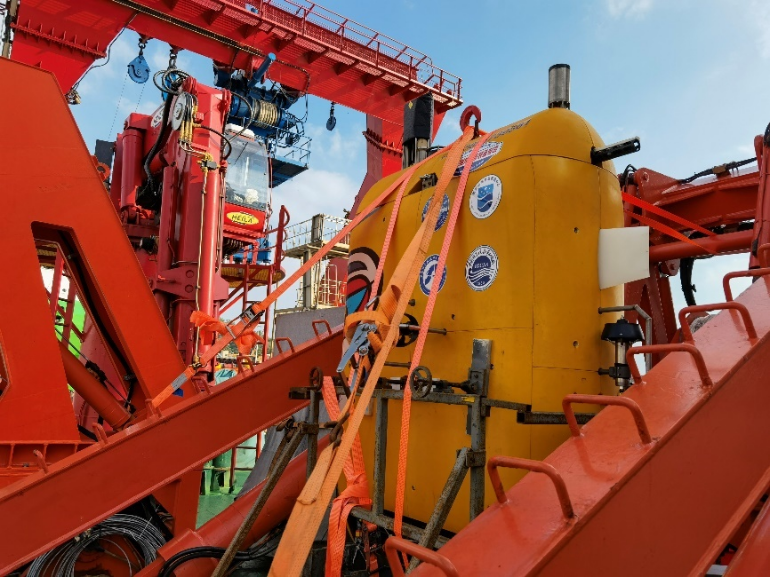 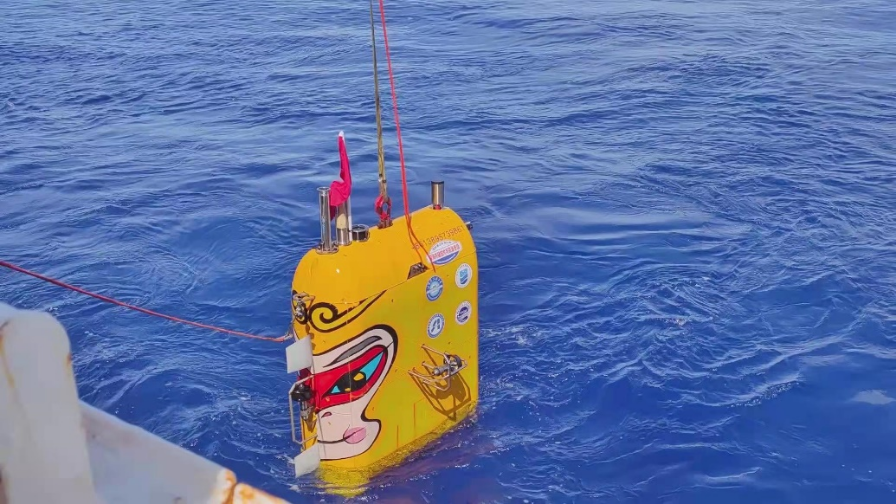 “Wukong” was thrown into the embrace of the sea

The members of the scientific research team cherish the hard won sea trial opportunity very much. In order to ensure the success of the 10000 meter sea trial of the Wukong AUV, they repeat, analyze, detect and upgrade each test in detail, formulate a number of plans and corresponding solutions, and often work overtime until the early morning. Once, in order to check whether the power battery of the “Wukong” AUV was faulty, associate professors Li Yueming and Cao Jian disassembled and tested the battery. In order to avoid danger, the two teachers held their breath and carefully disassembled it like a precision operation. In this way, the team, with the confidence of daring and success, gave full play to the scientific spirit of innovation and struggle, and ensured the complete success of the sea trial.

Wukong in the sea

The success of the 10000 meter sea trial of the “Wukong” AUV has engraved a heavy color in the mission journey of “serving the ship, the sea and national defense”. But for the Harbin Engineering Research team, the journey of the star sea is endless. They stand at a new starting point for the cause of becoming a maritime power and continue to make unremitting efforts and move forward bravely!

This paper is transferred from Harbin Engineering University & nbsp& nbsp;