In fact, for material scientists, diamond is somewhat troublesome – as the hardest material in nature, it has inconsistent vulnerability and may break up in response to pressure. Such characteristics limit the application scenarios of diamond.

How to make this “hardest material” more indestructible? In the latest issue of nature, two Chinese teams made simultaneous efforts and independently realized the synthesis of amorphous and subcrystalline Diamond – this is also the first time that scientists have synthesized these two materials on a macro scale, laying the foundation for a series of potential applications. 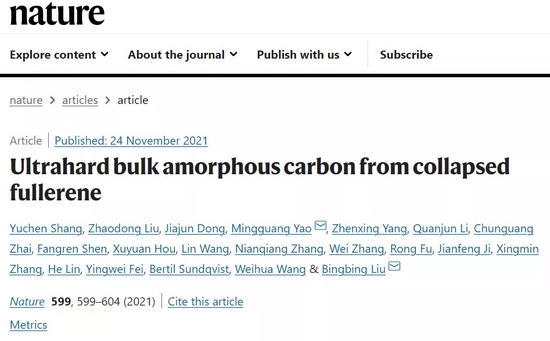 First of all, we need to know: diamond is so hard, why is it easy to break? This starts with the atomic arrangement of diamond. The carbon atoms in diamond are arranged neatly and orderly in the form of SP3 hybrid, forming a standard tetrahedron. This arrangement not only gives diamond beautiful appearance, but also makes them pay a fragile price. Stress weakness exists in long-range ordered crystals; On the contrary, materials with disordered atoms can withstand stress more evenly.

Therefore, if we can synthesize amorphous or medium range ordered subcrystalline diamond while retaining hardness through SP3 hybridization, the problem of vulnerability may be solved.

This week, two papers in nature achieved this goal. One of the studies was led by scientists from Beijing high pressure science research center and George Mason University in the United States. They synthesized subcrystalline diamond; In another study, a research team from Jilin University synthesized amorphous diamond. 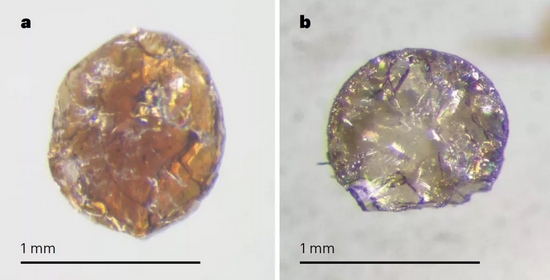 These two independent studies used the same reactant precursor: fullerene, which is familiar to us as carbon 60. An important reason for the selection of fullerenes is that a fullerene molecule contains 12 pentagons, which cannot form a periodic crystal structure. Therefore, it is more likely to form amorphous or subcrystalline substances on the basis of fullerenes. Previous studies have confirmed that fullerenes can be transformed into polymerized state under the pressure of 13 ~ 25 GPa. At this time, SP2 and SP3 hybrid carbons coexist in a disordered state.

“In recent years, with the development of large volume multi anvil press technology, we can study the structural evolution of materials under higher pressure of 30 ~ 50 GPA and obtain materials with new structure and new properties,” said Gou Huiyang, a researcher of Beijing high pressure science research center, the co-author of the first paper.

In the latest research, researcher Gou Huiyang and others studied the evolution process of fullerene and other precursors at different temperatures under high pressure of 30 GPa.

Under the pressure of 30 GPA, the polymerized fullerenes first collapse and lose their original structure, and then change into a new structure with the increase of temperature (e.g. 1600 K). So, is this new structure diamond?

In order to verify this, the research team comprehensively used X-ray diffraction, high-resolution transmission electron microscopy and molecular dynamics simulation to confirm that the material after the reaction contains medium-range ordered SP3 hybrid carbon atoms, which indicates that millimeter sized subcrystalline diamond has been born. The subsequent hardness test also found that the hardness of this new material is equivalent to that of natural diamond. 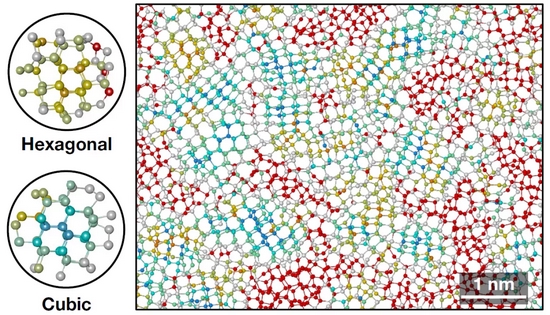 In another study, Professor Liu Bingbing’s team from Jilin University synthesized amorphous diamond by similar means. The precursor used by this team is also fullerene. They used the structural unit formed by the collapse of carbon 60 to explore its reaction phase diagram between 20 and 37 GPa. Under such conditions, millimeter grade amorphous diamond was synthesized, in which the proportion of SP3 carbon can reach 97.1%. The hardness and deformation resistance of this new material are equivalent to that of natural diamond. It has the highest hardness and thermal conductivity among the existing amorphous materials.

These two studies not only add two new members to the huge carbon family, but also provide the possibility for more applications. As mentioned at the beginning of the article, compared with conventional crystalline diamond, subcrystalline and amorphous diamond have stronger mechanical properties. In addition, their thermal stability is also superior, so they may have broad application prospects in fine processing and some extreme environments. In the view of researcher Gou Huiyang, another significance of subcrystalline diamond is that it connects amorphous and crystalline states from the structural topology, which is of far-reaching significance for explaining the complex structure of covalent amorphous materials.

In the news viewpoint article of the same period, Professor Alfonso San Miguel of the first university of Lyon, France, said that the new discovery may also promote the birth of new carbon carbon nanocomposites. Such materials with adjustable thermal, electrical, optical and mechanical properties will have broad application prospects.