It’s almost a breakthrough step away from entering metaverse.

Every technology explosion of mankind must be accompanied by great changes in lifestyle. For example, the emergence of the telephone directly broke the barrier in the original world space, and also indirectly affected the social economy, production and life, and even war in the following decades; Another example is the popularity of the Internet, which not only breaks through the limitation of space, but also breaks the limitation of time. Therefore, all human production and life began to be digitized, and the global village really came.

Today, we are undoubtedly experiencing a new round of technology explosion. Blockchain, cloud computing, quantum computing, artificial intelligence, virtual reality and so on are springing up, which will inevitably bring new ways of production and life. At present, it is generally believed that metaverse may be the form of the next generation Internet. Compared with the upgrading of PC Internet by mobile Internet, metaverse may have more dimensions of interaction and integration of real and virtual world than mobile Internet, which can not only meet people’s spiritual needs, but also greatly improve labor productivity.

However, at present, the problem lies in that we have not pried open the door of metaverse. On the one hand, it is the lack of content. Even if we can enter the virtual world, it can not match the reality one by one; On the other hand, there are hardware problems. For example, the current display helmet is too bulky and inconvenient to use. Of course, the most acute problem is the imperfect interaction. Except for vision and hearing, there is almost no touch, which makes people close to entering metaverse.

Of course, major technology companies are still actively solving this problem. Recently, according to foreign media reports, South Korea’s cutting-edge research institute has developed a new controller spinocchio, which allows players to feel virtual touch in metaverse space and experience your closer contact with the data world; Before that, the Reality Laboratory of meta (former Facebook) also showed an AR / VR prototype tactile glove. So what is the current development of virtual tactile and how does its emergence affect metaverse?

Virtual touch trapped in the laboratory

Let’s first take a look at the tactile controller spinocchio developed in Korea (spin is used for rotating mechanism, and occhio stands for the Italian word “eye”). Spinocchio is a new product developed by makiterac Laboratory of Korea cutting-edge research institute. The new technology can enable virtual reality users to touch and feel objects as realistically as possible in the virtual world.

At the same time, it can also render the thickness and sliding of the virtual object kneaded between two fingers, which is realized by using the mechanism with rotating and rotating disc, which applies the tangential skin sliding motion to the fingertip. We used the baseline tactile perception of motion cues to determine how the tactile perception of skin was different from that of spinchio. 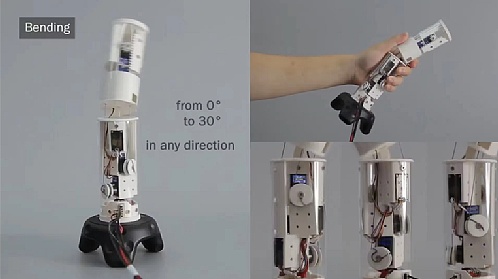