This article comes from: financial circles

On the evening of March 30, ICBC released its 2021 annual performance report and handed over a report card with stable chassis, many highlights and sufficient achievements. 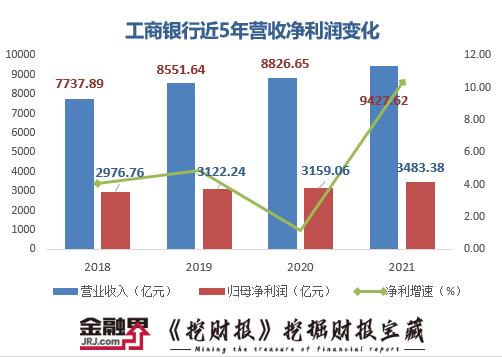 ICBC said in its annual report that the net interest margin of 2.11% remained at a good level in the banking industry. In the global interest rate continues to decline and the interest rate spread of the banking industry continues to narrow, the NIM narrowing range (- 4bp) is at a better level of domestic comparable peers, which not only implements the policy of reducing fees and interests and serving the real economy, but also shows a strong ability of fine management of assets and liabilities.

Keep pace with public and retail

It is noteworthy that the annual report also disclosed that the total number of individual customers of the bank exceeded 700 million, of which the net increase of county customers accounted for 55%. The number of mobile banking customers reached 469 million, and the number of monthly live users exceeded 100 million for the first time in the industry. In terms of wealth management business, nearly 17 trillion yuan of personal financial assets were managed.

The accumulated collection of non-performing loans was 190.1 billion yuan

In the past year, ICBC continued to strengthen the financing risk management of various industries, strengthened the disposal of non-performing assets, collected and disposed of 190.1 billion yuan of non-performing loans, and the asset quality was significantly improved. According to the data, by the end of 2021, the non-performing loan ratio of the bank was 1.42%, a decrease of 16bp compared with the end of the previous year, and basically returned to the pre epidemic level, with a decline of a new high in recent years. The overdue loan ratio was 1.23%, down 21bp; The overdue bad scissors difference was – 38.5 billion yuan, negative for seven consecutive quarters, a record low.

At the same time, ICBC’s risk resilience is also continuously strengthened, and the provision foundation is continuously consolidated. The provision coverage ratio at the end of 2021 increased by 25.16 percentage points to 205.84% over the end of the previous year. Insiders said that the risks of large state-owned banks will be gradually cleared. Subsequently, with the improvement of the macro environment, market concerns will be gradually weakened and are expected to stabilize.

Talking about non-performing real estate loans. Zhang Wenwu, vice president of ICBC, said at the performance press conference that the non-performing rate of ICBC’s real estate loans rose periodically in 2021, but the proportion of real estate loans was relatively low and the recognition standard of loans was relatively cautious. On the whole, the overall asset quality in 2021 is healthy and completely controlled. Investors can be full of confidence in the asset quality of ICBC, and there is no need to give a booster at all.

The total amount of dividends to be paid is 104.534 billion yuan

In the annual report, ICBC still plans to pay dividends.

Specifically, the board of Directors proposes to distribute RMB 2933 (including tax) for every 10 shares, and the total amount of dividends to be distributed is about RMB 104.534 billion, but it still needs the approval of the annual meeting of shareholders. According to the calculation of digging financial report, according to the net profit attributable to the parent company of 348.338 billion yuan, the dividend proportion is about 30.9%, which is consistent with that in 2020.

Guan Xueqing, Secretary of the board of directors of ICBC, said at the performance conference that the current dividend ratio is relatively moderate, and the relationship between profit retention, cash dividend and capital supplement should be balanced in the future, so as to provide an effective guarantee for the maximization of the long-term interests of shareholders.

As for the company’s share price continues to be lower than the net asset value, whether ICBC has a plan to repurchase the company’s shares. Guan Xueqing responded that ICBC has a relatively high dividend rate and strong investment attraction. It should be said that the fundamentals of ICBC are still good and the return on investment is stable. As a listed company, there is really no relevant information publicly disclosed.