Figure / provided by the school

The 14th National College Student advertising art competition 2022 (hereinafter referred to as the “grand Canton competition”) was launched recently. The main POSTER “creativity is king” is particularly eye-catching: a confident young man holds a paintbrush and uses light and shadow to depict the tiger’s head as the main picture. In the middle of the poster, the tiger’s head glittered with dazzling light, the tiger’s claws loomed in the blue and purple star cloud, and the breath of the king came to his face.

The team that designed the main visual poster for the grand Canton competition is from Guangdong Vocational and Technical College of light industry (hereinafter referred to as “Guangqing”), but the team members have just been a sophomore. This is also their first “electric shock” grand Canton competition. What kind of experience is it to design a “Facade” for the big Canton competition with many experts? What are the creative ideas and stories of the birth of the main poster?

What is the difficulty of designing “Facade”

As a national event, since the first session in 2005, the organizing committee has successfully held 13 sessions and 14 events. A total of 1679 colleges and universities across the country have participated, and more than one million students have submitted their works. So far, the grand Canton competition has become a national college liberal arts competition with large scale, wide coverage of colleges and universities, large number of teachers and students, high standard of works, popularity of college teachers and great social influence. Being invited to participate in the main visual poster design of the Canton competition is undoubtedly an affirmation of the school’s design level.

Ye Jun, head of visual communication major of Guangqing art and Design College, recalled to the reporter of Yangcheng Evening News that 11 years ago, Guangqing won 20% of the awards in the grand Canton competition, which was unique before. Especially as a vocational college, it was not easy to compete with many strong undergraduate design schools, which was also regarded as “Guangqing phenomenon” by people in the industry in that year. Perhaps because of the early accumulation, the organizing committee trusted the school, and the invitation letter for the main visual poster design of the 14th Canton competition was sent to the teachers and students of Guangqing.

But in fact, the difficulty of designing this poster is not small. Ye Jun said that it was late January when the organizing committee finalized the theme of “creativity is king”. According to the promotion rhythm of the competition in previous years, the competition will be officially launched in March, leaving only two months for the design team. When the creation time coincides with the winter vacation and Spring Festival, the team members are scattered in various cities, and the online meeting and online reporting progress are less efficient than the offline “brainstorming”. But what is more difficult is the emergence of creativity and inspiration. 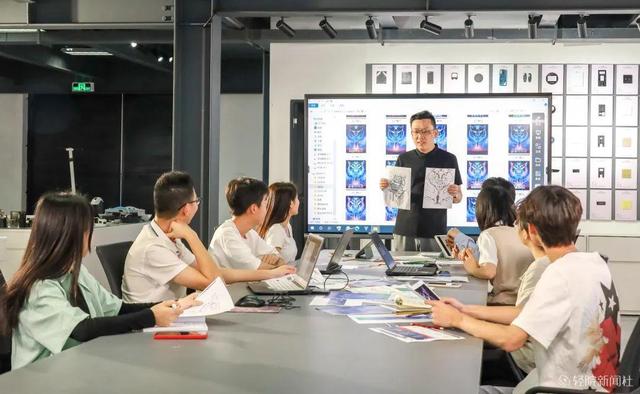 “We have to make a new picture, creativity and form of expression in the past dozen competitions, which is a challenge for everyone. We can’t lose to each other like the expression methods of our predecessors, but at the same time, we can integrate with the previous works, that is, the works of each session are wonderful, but people feel as a whole,” Ye Jun said, “The grand Canton competition is a national competition. Thousands of colleges and universities look at us. We are all insiders, and we have to make everyone feel that this work has credibility and can really represent the characteristics of the competition.”

Get through the “last mile” of talent training and market demand 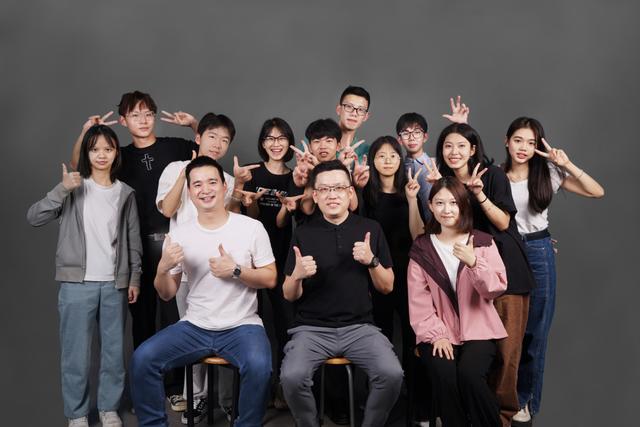 Yao Yuejian, a student of visual class 204 in charge of illustration design, said: “we began to draw up the theme of tiger. After learning that the organizing committee wanted to join the concept of metaverse, we designed a scene painted by a teenager, showing a tiger’s head. We concluded the effect of metaverse through the interweaving of blue and purple.”

Deng Yanfen, a student of visual class 202 in charge of font design, said: “I associate tiger teeth from tiger head, but the natural shape of tiger teeth is not suitable for our main vision this time. Therefore, I turned its shape into a triangle and applied it to font design. Both strokes and tilt angles have something in common with the designed tiger teeth.”

This work has been revised for 160 times and finally finalized. During this period, when the students couldn’t draw and find inspiration for several times, ye Jun encouraged: “large-scale events will certainly encounter many difficulties, which need to be optimized and modified constantly, or even a process of overthrowing and rebuilding. You can shed tears, but you can’t put down the pen in hand, so you’d better keep trying.”

Ye Jun told reporters that whether it is to promote learning through competition or the integration of industry and education, the school should let students learn both morality and technology. The “morality” is reflected in the craftsman spirit, the responsible attitude and the performance of excellence; “Technology” is a multi-level discussion and expression of design techniques.

The reporter learned that the school signed a school enterprise cooperation agreement with well-known design enterprises, set up an industrial college, and use industry experience and resources to feed vocational education, so that students can be familiar with vocational education, the ability and quality they should have in their posts and employment. The reform of the talent training mode of “integration of work, study and business” for art and Design Majors in vocational education has opened up the “last mile” between talent training and market demand, and cultivated compound innovative technical and skilled talents of “fine design, understanding of science and technology, business and humanities” through the deep integration of industry and education.