With the efforts of game, social media and other media companies, the concept of “metaverse” has also become a hot word in 2022, setting off a new round of communication concept revolution in the media industry. This provides immersive experience based on extended reality technology, generates a mirror image of the real world based on digital twin technology, builds an economic system based on blockchain technology, and closely integrates the virtual world with the real world in economic system, social system and identity system.

The film “shell Raiders”, starring Scarlett Johnson, uses digital shooting techniques to show the audience a future world full of science fiction and bizarre. Row upon row of skyscrapers and giant 3D virtual advertisements, direct outdoor advertising has a sense of the future both far and near, and the commercialization of “metaverse” has been greatly displayed in the audience’s vision.

The combination of outdoor advertising and metaverse is undoubtedly a powerful tool to reach the younger generation. Now let’s see with Xiaobian how “shell attack mobile team” interprets the integration of “metaverse” and outdoor advertising.

The opening of the film is a dazzling sense of urban science and technology. The virtual scene and sound effect are very shocking. Among the films with an investment of 700 million yuan, from billboards to street light signals, the effects of the items in the film are more in line with the setting of the future city through the rendering of virtual projection three-dimensional giant outdoor advertisements.

The culmination of the development of stereo vision, that is, “naked eye can see magic”. Just as the avant-garde holographic image in the film shows the three-dimensional visible to the naked eye. In the future, all virtual images will also be presented directly on the retina, making the real and virtual in a “silly indistinguishable” state.

Compared with the static or 2D advertisements commonly used in previous films, the hand cream, gene company, skin care products and gym advertisements displayed in the film have a stronger sense of visual coercion and more interactive advertising. More vividly introduced the product use, product form and product effect.

A6021 the above picture shows the advertisement of hand cream. The huge geisha projection appears on the real city building in three dimensions to interact with the audience and set off the feeling of hand cream moistening the palm more strongly. 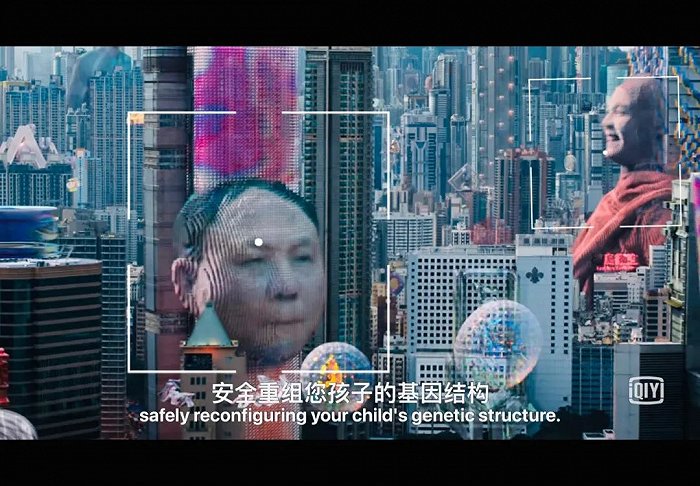 The skin care advertisement puts the product effect on the wall of the building by means of laser scanning, which means that the whole face can be moistened from top to bottom. Such a display form makes the audience more intuitive to understand the efficacy of the product. 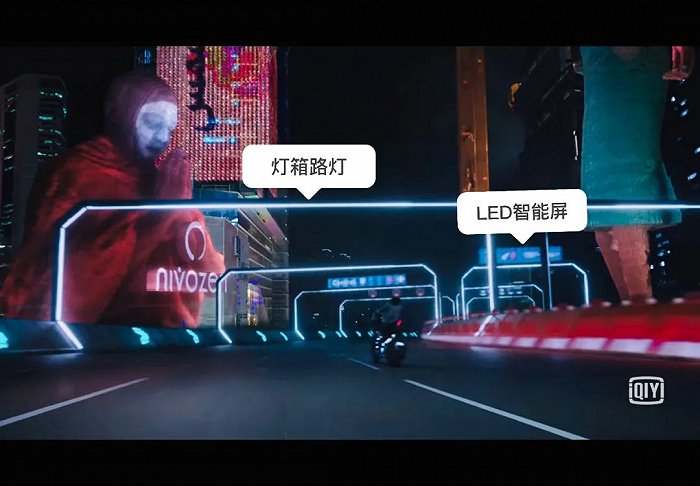 Outdoor traffic advertising media has also become richer in metaverse’s world. Street lamps have become the form of light boxes, and signs on the road have become intelligent LED comprehensive screens, adding advertisers’ choices in various scenes in the city.

If you carefully observe the street scene in the film, you can find holographic 3D advertisements of major brands such as Heineken beer, Adidas, Canon, Hanka, kolomei and Hong Kong Airlines on the outer wall of the building (as shown in the following group of pictures, the internal reference gentleman circles these advertising brands in a yellow box for everyone to feel).

What is more worth mentioning is that “shell attack mobile team” is adapted from the cartoon of the same name created by Japanese cartoonist Lang Zhengzong. The famous paramount film industry in the United States is responsible for shooting. Behind the American film industry, there are almost large technology companies and capital support, because many “future” technologies of American film will be realized one by one by related American technology companies in a few years. These large-scale films, from a certain point of view, It is also the advertising videos and grass planting tools of new products that have long been laid out by American technology companies and capital. The film is full of Japanese cultural colors that are well known to people all over the world and loved by many people, among which “geisha” appears in many scenes. The pictures of geisha robot and geisha outdoor holographic three-dimensional advertising are very eye-catching and attractive.

Advertising is based on the exchange of culture and emotion. The combination of “geisha traditional culture” and advertising creativity greatly shows the characteristics of the brand. The eye attraction will be greatly improved by using the naked eye 3D virtual scene experience

Imagine what it would be like to be in these giant metaverse cities? Wrapped by powerful technology, you can feel the advertisements in metaverse world such as naked eye 3D at a close distance, which is undoubtedly a great impact on the sense of seeing and hearing. The open space, combined with the large screen and multi angle release, not only brings users a strong sense of visual coercion, but also improves the brand cognitive package, so as to reduce users’ resistance to advertising. Outdoor advertising will become an energy field of brand communication and influence.

Returning to reality, the current outdoor advertising has gradually realized naked eye 3D. In order to celebrate the 60th anniversary of Yuri Gagarin’s first manned space flight, tundra created a special work, using an industrial robot to record the audio-visual device row in a mirror to the bottom, and synchronized with the content generated in real time, so as to emphasize the parallax effect of 10 separately controlled rotating LED holographic screens.

In the film, people marvel at the huge geisha figure floating in the air and the swimming fish around the building. In fact, many elements in the film can become the application direction of AR and VR technology in the future.

A major feature of metaverse is the “integration of brain and computer”. In shell attack, signals can directly act on vision. Users can directly present AR and VR images on the retina without wearing helmets, glasses and other equipment. In the film, the protagonist suko and her team members can use the interface modeled by AR technology to complete communication and view information, which is similar to hololens to some extent.

VR technology experience can become a role for consumers to enter the plot of advertising films. In this process, consumers are no longer recipients. They are linked by content and become participants in outdoor advertising, which is a step closer to the product. For brands, it is an indisputable trend to carry out marketing through AR and VR functions.

According to statistics, in 2020, 83.1 million consumers in the United States used ar every month, and 61% of consumers said they preferred retailers with AR advertising experience; 71% of consumers said they would shop more frequently if they used ar. One billion people use AR applications every day, and it is estimated that there will be nearly 2 billion mobile ar users in 2024. Driven by VR and AR functions, the brand will get more potential customers and opportunities.

The film “Dr. strange” has set up a digital intelligent electronic interactive screen in the mall in the early stage of its release. The audience can experience the “distorted reality” in the film through the AR intelligent game on the screen. With the touch screen and simple gestures, they can obtain “super power” like the movie protagonist. After sharing this case, many Marvel fans have given praise and referrals, attracting more fans to feel the charm of “super power”. After the film was released, the box office once peaked, and finally the total global box office revenue reached 677 million US dollars.

Summary: for immersive outdoor advertising, metaverse has strong demonstration significance. Naked eye 3D holographic technology, VR and AR interactive technology have very similar development characteristics with outdoor advertising in terms of concept, strategic opportunities and development prospects. From the perspective of providing people with experience products, metaverse can provide virtual scene experience and physiological and emotional response through scene marketing and digital devices, which can be fully used in the production of product content of immersive advertising. Therefore, whether from a macro or micro perspective, metaverse points out the direction for the development of immersive advertising.