These scenes that only appear in the magical world of Harry Potter can now be experienced in various digital art galleries and science and technology galleries in the real world.

For example, the “jinlingtu Digital Art Exhibition” exhibited at Nanjing Deji Art Museum at the beginning of this year can achieve such a scene:

When you enter the scene, the prosperity and changes of Nanjing, the ancient capital of “jinlingtu Digital Art Exhibition”, are displayed around you like a scroll. 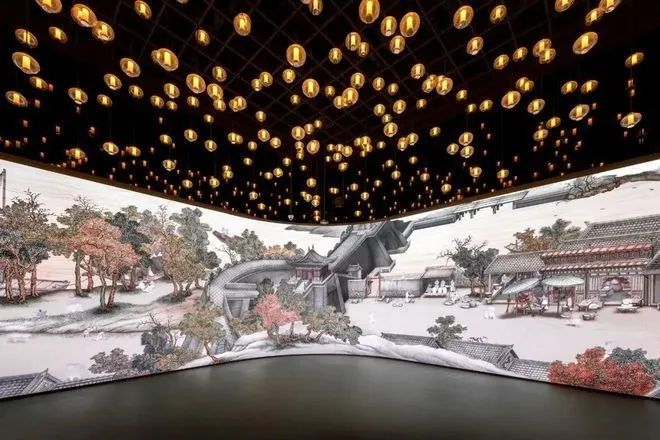 The commercial street between merchants, the Qinhuai River with developed shipping, the ancient city gate with parallel water and land, and the duck restaurant with the same fragrance… You are in the Qinhuai market, experience role-playing, follow in real time, change scenery step by step, lead the “plot” of the exhibition, and complete the acquisition of deep knowledge through “dialogue, decision-making and exploration”. Encounter 533 characters from the perspective of “me”,

In the whole process of exhibition preparation, i.e. using virtual characters as an effective carrier to enter the dynamic scroll, let TA swim in the painting as his own “Avatar”. Through independent exploration and knowledge acquisition, the audience can experience “characters entering the painting” and “real-time following”, directly communicate and interact with the people in the painting from the perspective of the first person, break the barriers between cultural relics and the audience, and realize the exhibition experience of “following the painting”.

In order to achieve this effect, the exhibition is a cutting-edge technology widely used in 3A game masterpieces, VR / AR and other industries. Through its addition, the audience can create their own role data and realize role selection and generation. In addition, in order to let the audience have a good tour in the “business” Jinling City, the exhibition carries out 3D modeling of the buildings and environment in the painting, interconnects UWB with unity engine and self-developed intelligent management system, and continuously adjusts the data tolerance to achieve the ideal positioning accuracy. For the first time, unity engine is used for real-time rendering

Therefore, with the mobile terminal interaction mode of “accurate to the centimeter level of single digits” and independent decision-making, the audience can experience the painting roaming from the first person perspective without feeling, cross the bustling Jinling City of the Song Dynasty in education and fun, and feel the changes of the city in the flow of time.

Not only the “jinlingtu Digital Art Exhibition”, with the arrival of the “first year of metaverse”, since the second half of last year, more and more art institutions, art projects and artists have begun to explore the relationship between art and “metaverse”, imagining and building a multi-dimensional “art metaverse”.

01 art metaverse, the romantic combination of technology and art

As early as 2016, the American interdisciplinary team metaverse Art Gallery made relevant attempts. The goal of the team is to let artists, galleries and curators import 3D art into metaverse without technology, which will allow metaverse to be used in random art exhibitions in virtual reality space.

The team initially created a simple and unified 3D user interface sketch that allows 3D artwork to be placed in VR. At the same time, they also designed a website that can be used to manage and explore 3D art, artists, art exhibitions and digital galleries.

The case of cooperation between art institutions and business platforms should be first collected in the SWITCH handheld game, the Animal Crossing club and the art museum sharing exhibition held jointly with the Metropolitan Museum, the Gatti Museum, the Denver Museum of art and other museums.

In May 18, 2020, in celebration of the international museum day, Nintendo and major organizations jointly held collections and artwork sharing activities in the game animal crossing.

This shows that art institutions may initially explore the art “metaverse” by participating in the creation of the game world in the early stage.

The arrival of the epidemic has accelerated the migration from the art world to the virtual world. In the context of the development of science and technology and policy support, art institutions are more involved in the experimental construction of virtual platform.

NFT is a unique, traceable, indivisible, forgeable, transferable and other advantages. Due to its own digital scarcity, non-homogeneous tokens derived from blockchain technology were first used in collections, works of art and game scenes.

Therefore, for artists, NFT works are a new way of creation and source of assets. Artists can auction, sell and exhibit their NFT works.

For example, in March last year, the NFT work “everydays: the first 5000 days” by artist beeple was sold at Christie’s auction house for $69.35 million, setting a new auction record for digital art.

In October of the same year, Japan held the first special NFT auction, which shows that NFT art auction is in full swing.

According to chainalysis statistics, as of December 15, 2021, it was found that a total of $40.9 billion had been invested in the smart contract used to establish NFT on Ethereum. According to Morgan Stanley, the digital collection market will grow to $300 billion by 2030.

In China, the digital Tibet market is also very popular. It can be applied not only to the field of cultural inheritance and knowledge popularization, such as the digital collections released by 17 cultural and Expo institutions such as the Forbidden City, Guobo, Hubei Provincial Expo and Hunan Provincial Expo, but also to popular science innovation. For example, aerospace cultural innovation under China Aerospace launched the “Shenzhou V” 3D digital collection, but also to music copyright, literary creation, government activities, new product marketing, film and television works, etc.

Nowadays, digital Tibet is a trend, and people from all walks of life are trying to open this new market.

For example, in September last year, Zhang Huan, the first Chinese artist, was invited by the Hermitage Museum of the Russian National Museum to participate in its first digital art virtual exhibition “the ethereal aether”, released his first NFT work “grey square”, and also launched blockchain digital works such as the world’s first behavioral performance works “an artist’s Celestial Burial” and “poppy field”. At the same time, he also created an art interaction platform integrating social networking, creation, trading and games, which is called “Huan universe”.

AI art refers to Harold Cohen (1928-2016). It can be said that Harold is one of the earliest AI artists. Harold began to develop Aaron system in the 1970s and use artificial intelligence to create works of art. Aaron system is also one of the AI systems with the longest running time and continuous maintenance in history. Works of art created using artificial intelligence software.

Harold Cohen is a pioneer in the art of computer algorithms.

Since 2018, with the birth of the generation countermeasure network Gan and the maturity of using machine learning algorithms to generate images, the art of artificial intelligence has made great progress.

On February 13, 2018, Christie’s auction house in New York sold an AI work of art, which was made using a trained Gan. It can make new images based on a data set of 15000 portraits drawn between the 14th and 20th centuries. The final price of the work is $432500, more than 40 times its initial valuation.

However, although the technical achievements of these works of art are impressive, whether they can really be called works of art may vary. How to define the nature of AI works of art? Is it a work of art as unique as human works, or is it just a poor imitation of human works?

The most troubling problem about AI art may not be whether it is counted as art, but copyright.

Recently, in an appeal against copyright, the US Copyright Office once again refused to provide copyright protection for works of art created by artificial intelligence. The debate on the copyright of AI works of art will probably continue for some time.

02 “metaverse” trend, art cannot stay out of it

Nowadays, forums with the theme of metaverse, art and technology exhibitions, encrypted art trading platform and metaverse culture week have sprung up.

Although art metaverse opens up the imagination of art institutions and art practitioners about the possibility of future art ecology, generally speaking, the concept of “metaverse” is still in its early stage. At this stage, the exploration of most museums and art galleries is more like copying a real art museum in virtual reality.

Some artists believe that this does not constitute a real innovation. Moreover, in the limited technical conditions at this stage, it is difficult for human beings to really enter the envisaged “metaverse” because of the limitations of body and flesh.

However, it is undeniable that no matter whether “metaverse” really heralds the next future era in which real and virtual are intertwined, in the face of the promotion of the next technological civilization, art can not stay out, whether it is the exploration of new artistic practice or critical thinking.