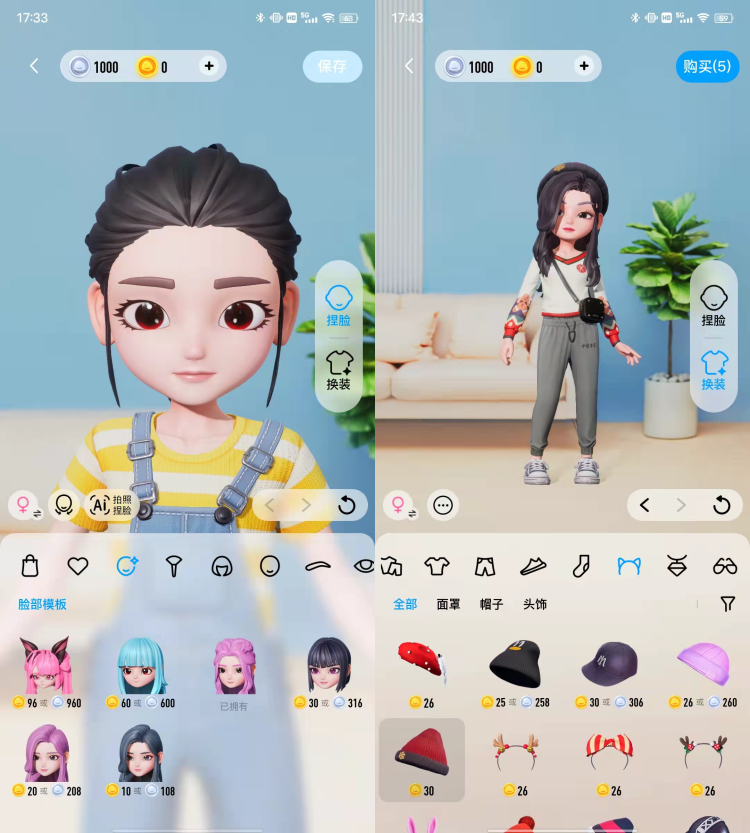 But super qq show is not just an upgraded version of QQ show. On the basis of retaining the QQ show playing method, users can also have their own “nest” (a virtual room for users to dress up freely), use their own virtual image to shoot templated pictures and videos, and match netizens online to play some games, etc.

Face pinching, costume changing, space dressing and online games all sound like the functions of a game. However, different from the game, all the functions in the super qq show finally point to one purpose – social networking.

For example, in space decoration, users first need to go to the furniture store to buy their favorite furniture, and the process of visiting the furniture store looks very realistic – you can “try” the furniture here, such as sitting on the sofa or lying in bed to experience the effect, you can also see the virtual images of other users who are visiting at the same time, and you can even type or voice chat with people who are visiting at the same time and send expressions, And “command” their own virtual image to make various actions. Interestingly, in furniture stores with different themes, sometimes you can see a moving picture of the glory of Tencent’s game king on the wall.

After you buy furniture and decorate your room, you can also invite the virtual images of other users to be guests. You can also chat with the guests and interact with them.

When the super qq show was just launched, it also launched a “video room” function, which will play different videos at different times (much like live TV), which are basically copyrighted content from Tencent videos. Similar to furniture stores, users can also see the virtual images of other online users in the video room, sit on the sofa and watch videos together, or communicate with words or voice, greet with various actions, and so on.

At present, another function in the super qq show “Binhai Music Square” can be said to inherit the audio-visual room, but similar to the real square, its space is much larger. At present, many functions of Binhai Music Plaza are still under development.

Speaking of this, many people may have a word in their mind – metaverse.

According to people’s general understanding, metaverse is a virtual existence. Each user has identity, social relations and economic activities in this virtual world, and can even work and make money in it.

The difference between metaverse and games is that the identity and social relationships of users in the game are only temporary, and the game has a beginning and end; Metaverse is equivalent to a replica of our real society. Different things will happen in real time in different places inside (like the video played in real time in the super qq show video room), and everything may be related to you, and the world is there and will not die out for a long time. Because of this, metaverse has higher requirements for synchronization and authenticity.

Although it can not be called metaverse in the strict sense, it is obvious that the super qq show has the shadow of metaverse.

Before that, many people may not associate QQ with metaverse, but in fact, there are various signs that metaverse has been written into the future of QQ since a year ago.

On April 15 last year, Tencent platform and content business group (PCG) announced a new round of organizational structure and personnel adjustment, announced the integration of Tencent video, micro vision and application treasure, and jointly established an online video Bu subordinate to the platform and content business group (PCG). This means that Tencent will merge the long and short video business and further integrate the content sector. After this adjustment, the face of Tencent’s “big content system” is clearer – the upstream is the IP source composed of Yuewen group and Tencent animation, the midstream is the film and television production composed of Tencent film and television and Xinli media, and the downstream is various applications composed of Tencent video, QQ music, micro vision and Tencent games.

In this organizational structure adjustment, which is considered to be the follow-up of the “930 reform” of the third organizational change in Tencent’s history, and the integration of content has entered a period of in-depth change, Yao Xiaoguang, vice president of Tencent, officially succeeded Liang Zhu, vice president of Tencent and concurrently served as the head of PCG social platform business. QQ is also handsome.

So, who is Yao Xiaoguang?

If Liang Zhu, who was previously in charge of QQ, had some origin with QQ (he has been the person in charge of QQ space for many years and incubated the k-song software “national k-song” in QQ space), Yao Xiaoguang’s resume has not even matched with social products. In fact, while obtaining the new identity of the person in charge of PCG social platform business this time, Yao Xiaoguang’s other better-known identity is the president of Tianmei studio under Tencent interactive entertainment group (IEG), which is a “game player with positive roots and Miao Hong”.

Since joining Tencent in 2006, Yao Xiaoguang has been focusing on Tencent’s self-developed game business. In the development process of Tencent games, the two most important successful turns – the launch of QQ flying car and the glory of the king are inseparable from Yao Xiaoguang’s leading figure, The “glory of the king” planned by it has become Tencent’s golden finger in the mobile game market (which may also explain the wonderful connection of the moving picture of “glory of the king” in the super qq show).

In fact, when Yao Xiaoguang was announced to take over the appointment of QQ, some media analysts believed that the addition of Yao Xiaoguang, the ace teacher, would “inject technology and imagination into the future development of QQ” and provide the most direct convenience for the “integration and grafting” of games and QQ.

After concurrently serving as the head of IEG and PCG, Yao Xiaoguang has actually made a series of attempts to integrate social networking and games. For example, in August 2021, Tencent PCG tested a game social product called “noknok” (Chinese name “noisy community”), which is considered to be benchmarking the overseas game chat community “discord”; The recruitment of Z plan in September 2021 also showed his determination to explore metaverse when forming a team.

To this super qq show, Yao Xiaoguang’s personal color has a very obvious impact on QQ, a social product.

The person in charge of cross business group was appointed for the first time. The appointment object was a hero who had a significant impact on the development of Tencent. Tencent not only showed great trust in Yao Xiaoguang, but also released the signal of wanting to save QQ.

Although Tencent’s rise began with QQ, when wechat won the ticket of mobile Internet for Tencent, QQ retreated to the second line and was not placed at the strategic traffic entrance by Tencent. QQ is also considered to undertake two missions different from wechat within Tencent——

“One is to focus on young people and develop a large number of content and social needs related to young people; the other is to become a ‘test field’ of Tencent products. When wechat becomes more cautious and instrumental, QQ has moved towards openness and diversity in trying to innovate products.”

However, the situation of QQ seems to be getting more and more embarrassing. On the one hand, the number of users continued to decline – QQ’s highlight moment stayed in 2018. In that year, its total monthly life reached 807 million and the monthly life of intelligent terminals reached 699 million, with a year-on-year increase of 2.5%. However, since then, the number of users of QQ began to decline continuously, accounting for only half of the number of wechat users by 2021. On the other hand, although QQ has tried many times on new products, there are not many out of circle products that can be taken out in the end. On the contrary, it has been criticized by more and more users as bloated and disorderly.

However, as the traffic entrance of Tencent PCG, Tencent cannot give up QQ.

In an article “Ma Huateng opens a new game: Zhang Xiaolong is at the wechat home, and Yao Xiaoguang goes to QQ to fight wild”, the author wrote, “when Tencent found that it was difficult to save users by relying on QQ itself, let alone Help PCG complete its future development, the products promoted by QQ in those years also rushed back to the Savior one by one.” QQ urgently needs a new direction and start. Among them, Yao Xiaoguang’s task is undoubtedly the most important.

The launch of the super qq show may be just the beginning, but it can be seen that Yao Xiaoguang has been equipped with the most solid technology for this purpose – in the version upgrade at the beginning of this year, QQ built in the installation package with the illusory engine 4 (game design and development engine), and benefited from the illusory engine 4, the exquisite degree of pictures and costumes in the super qq show has exceeded many people’s expectations.

In any case, Tencent can no longer see the number of QQ users continue to decline.

As early as the “930” organizational structure adjustment in 2018, after combing and reorganizing the old business of “social + content”, Tencent has actually figured out the importance of PCG for its future development. More than three years later, Tencent has released the signal of adjustment again. Relying solely on wechat and the glory of the king, Tencent’s trump card is not enough. Finding a way to strengthen PCG is the king. As the flow base of PCG, QQ should be the place where the scalpel falls.