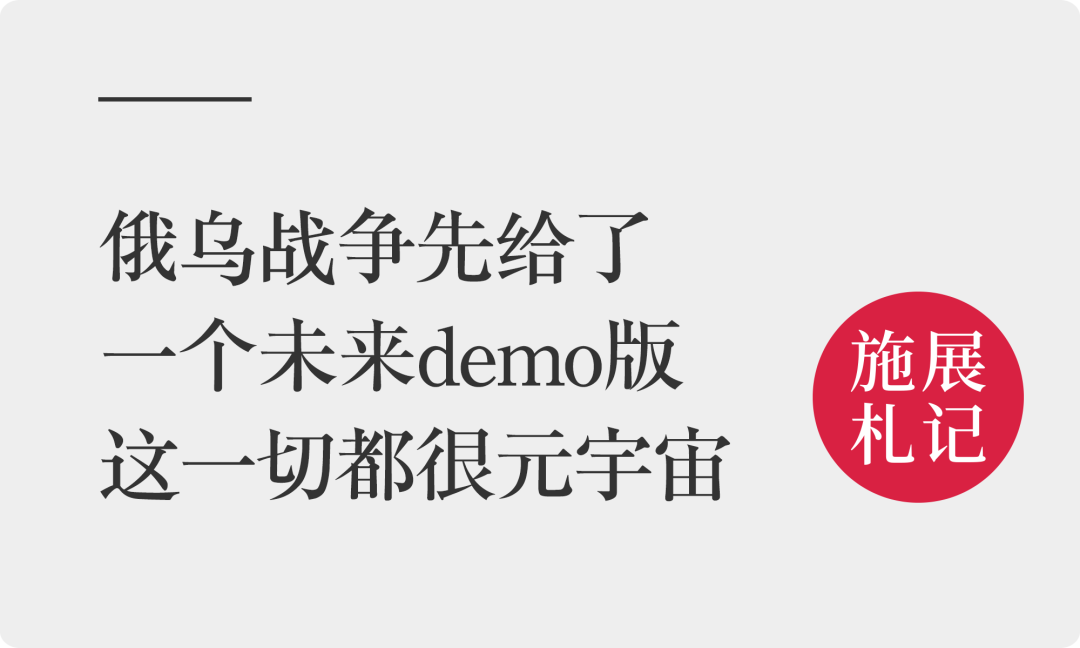 1. The Russian Ukrainian war is launched online and offline at the same time. Offline and online are highly integrated and shaped each other, and both show highly distributed characteristics. It is simply a metaphorical metaverse war.

2. In my previous notes, I have repeatedly mentioned that distributed participation in the era of social media is reducing war from a collective thing to an individual thing, thus redefining war; It is also redefining politics. Politics needs to tell a good story and perform the story well. On social media, zelenskiy’s two-way interactive small theater performance has more advantages than Putin’s one-way centralized big screen performance. Zelenskiy, based on social media, performs in a small theater on a global stage, turning war into a process of fans chasing drama, which seems to be a metaphor of metaverse.

3. In this scenario, the power of values has become unprecedented. At first glance, values are just words, as if they are a volatile mass of gas, but it is the values pointing to the distributed order that can mobilize individuals who will never have a chance to meet offline and form collective action online, turn them into a nowhere and ubiquitous force, and constantly iteratively shape the behavior boundary of all parties, which is unprecedented. Many people feel that metaverse is a gimmick and that it is an ethereal gas. Do you know that in the distributed era, the power of this “gas” is beyond the imagination of the traditional era. Metaverse belongs to the era of Qi, which will reverse shape the water, earth and fire of the traditional era.

4. Fedorov, the post-90s Deputy Prime Minister and Minister of data transformation of Ukraine, was the boss of an Internet marketing company before becoming a politician and was very familiar with network communication skills. Zelenskiy, a very unreliable personnel appointment at first sight, has become a wonderful pen in the metaverse war. Fedorov is very imaginative and knows how to dramatize sadness and turn business into games on social media. These are the basic communication logic in metaverse. Let’s take a look at two cases.

A6022 figure | ZELINSKY and Fedorov

5. Case 1: zelenskiy is in the core of the battlefield in Kiev, but he can speak everywhere in the US Congress, the European Parliament and so on without leaving home to win great support. This itself is a metaverse style online and offline integration scene. A small video released after the speech of the US Congress presents the beauty of Ukrainian cities before the war and the tragedy in the war in a very comparative way. Coupled with the heartfelt background music, the tragic artistic effect is first-class. This reminds me of some photos I’ve seen before. They were taken by Ukrainian photographers. Some people commented that they took the effect of karavacho’s oil painting. This artistic level in Eastern Europe is really not covered. In the metaverse era, presenting appearances through tension art forms and viral communication through social media is a core ability to reach the essence

6. Case 2: Fedorov released a donation game on social media a few days ago. For $2.99, you can download the game and complete the donation, and launch Putin to Jupiter. It was very popular for a time. The game of business, while quietly implanting values, can meet the needs of people to express their sense of justice at a very small cost. This kind of play is simply metaverse. More than that, there are derivative dramas: after musk issued a challenge on social media and announced that he would compete with Putin, Fedorov quickly forwarded this associated game and commented that I’m sure musk can send Putin to Jupiter.

8. Metaverse is to play business. Game is a powerful driving force in human nature. In the way of game, it can drive a large number of people at low cost and distributed to build a metaverse order; Competition is also a powerful driving force in human nature, and war is the ultimate presentation of competition. Metaverse will play the war and stimulate people’s strong enthusiasm for participation; We have seen a demo version in the Russian Ukrainian war today.

9. Such a game of war field also drives more people to participate in distributed brain holes. A Chicago artist made zelenskiy’s LEGO figurines and sold them online to raise money for Ukraine. We will certainly see more playing methods come in, and all these playing methods imply the dissemination of values in the game, imperceptibly changing people’s understanding of the world and the legitimacy boundary of various behaviors. This is metaverse.

10. Metaverse will not be just an online parallel world, it will be an interactive and procedural existence of online and offline integration. Let’s take a look at the part under the midline of the metaverse war between Russia and Ukraine. It also presents the distributed characteristics of metaverse in various ways.

11. First of all, Ukraine’s tactics are very different from those in the past. Ukrainian defense minister reznikov dissolved the Ukrainian army’s combat units above battalion level in recent years’ military reform, making the basic combat units extremely distributed and flat. At the same time, he vigorously strengthened the information and intelligence level of the command system. The Ukrainian military command system seems to be a super middle station. Based on the integrated air and space information from the background, it commands the distributed small combat units at the front desk to attack flexibly, and uses javelin missiles and Stinger missiles worth hundreds of thousands of dollars to destroy Russian tanks and aircraft worth millions of dollars or even tens of millions of dollars. The Ukrainian army tried to avoid a centralized frontal decisive battle, but turned the war into a distributed fragmentation, a highly asymmetric war of fighting big wars with small ones. The Ukrainian army’s internal operations are low-cost and low supply requirements on the battlefield, and high-cost and high-tech requirements on the war command system; The situation of the Russian army is just the opposite.

12. This new method of warfare relies on the concept of war, distributed, information-based and intelligent, which makes Russia’s war method similar to the decisive battle of World War II soldiers seem very clumsy and outdated. The organizational form of the Ukrainian army makes it completely unsuitable for foreign wars, but highly suitable for local self-defense wars. The corresponding war ideas and political ideas behind it also match the distributed values. Offline and online have the same structure at the conceptual and organizational levels; Behind this, we rely on the high-tech and information platform of online and offline isomorphism. Technology itself is neutral, but the different characteristics of technology often resonate with the values and organizational logic of a specific orientation, which is conducive to the dissemination of specific values and organizational forms, which is common in history. Today, it is a new case, the case of metaverse.

13. This organizational logic also fully mobilized the people. Recently I saw a message to be verified. Ukraine released an app. People can use this app to shoot the Russian army they see and upload it to their location, and the Ukrainian army will take action accordingly; At present, I only see one information source about this matter, and I can’t verify its authenticity. However, this matter is very metaverse. It is completely connected online and offline. The Russian army is more difficult to deal with the power of nowhere and omnipresent. So even if it’s not true yet, it has a good chance to become true.

14. Another message is that two American college students, whose names are from Eastern Europe, are not sure whether they are Ukrainians. They have developed a website on which Ukrainian refugees and European families willing to receive refugees can quickly find each other. This is like a war version of airbnb, but it turns the sharing economy into a shared disaster, and distributed values can greatly encourage people to participate in it.

15. Online can change the boundary of behavior, but it still depends on offline. The war is not over yet, so we need to continue to observe how it will evolve in the future. The same is true for metaverse in the future. Online will redefine offline, but online can not be separated from various reverse binding forces offline. Online and offline will be a process of mutual shaping. This version of metaverse makes us think about the future.