With the concepts of metaverse, blockchain and digital collection (NFT) becoming more and more popular, these new technologies have become the new “painted skin” of some fraud gangs. On March 15, Beijing Banking and Insurance Regulatory Bureau issued risk tips to college students and mentioned the four routines of scams, including the “zero interest” loan trap on the network platform, malicious collection on the network platform Cancel the “campus loan” trap and the “metaverse” and “blockchain” network traps.

With regard to the “metaverse” and “blockchain” related scams, the Beijing Banking and Insurance Regulatory Bureau reminded that at present, there are some “small games” on the Internet, hyping under the concept of “metaverse” and “blockchain”, claiming that “making money while playing games”, “short investment cycle and high income”, luring students to invest by exchanging virtual currency and purchasing game equipment, Even entice students without economic foundation to borrow money from the network platform for investment, and finally run away with the money.

Wang Fang (a pseudonym), a newly graduated college student in 2021, shared her experience with reporters. Wang Fang hasn’t officially found a job after graduation because of the epidemic. At the recommendation of her former senior, Wang Fang participated in a project called “metaverse 958 ecology” in early 2022. 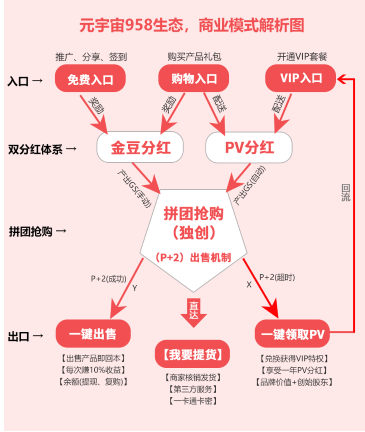 “My friend told me that this is a typical MLM plate made with the help of metaverse concept, which has nothing to do with metaverse.” Wang Fang and reporters.

While vigorously cracking down on virtual currency in China, virtual currency projects such as “Pangu” promoted by blockchain are still active in the community. Recently, “Pangu” was exposed to cutting leeks and investigated; Many projects that publicize the concept of NFT with the help of digital collections hype a picture to thousands or tens of thousands of yuan, but cut prices sharply during secondary transactions.

Metaverse and digital collection projects in the market are mixed. Liu Yang, a partner and lawyer of Beijing Deheng Law Firm, told the reporter of Huaxia times that metaverse, blockchain and digital collection (NFT) are all emerging fields, and there is a trend to become high-quality industries in the future. However, at this stage, criminals often use the concepts of metaverse, blockchain and NFT, Selling dog meat with sheep’s head hanging is actually engaged in illegal activities of fund dish.

In February, the inter ministerial Joint Conference Office of the China Banking and Insurance Regulatory Commission on the disposal of illegal fund-raising issued “tips on preventing the risk of illegal fund-raising in the name of” metaverse “, including” fabricating false metaverse investment projects, cheating under the banner of metaverse blockchain games, maliciously hyping metaverse real estate for money, and engaging in illegal profit making of metaverse virtual currency in disguised form “.

Under the banner of metaverse and blockchain, criminals fabricate the “myth of making wealth” and tempt them step by step. Participants are very vulnerable to property losses.

Liu Yang believes that since 2017, ICO involving blockchain and virtual digital currency has become hot. The central bank and other departments have issued documents to prohibit relevant ICO behavior. After that, ICO behavior has converged slightly. However, after metaverse became popular, criminals began to use new concepts such as metaverse to commit fraud. In fact, it is still a variant of ICO (initial token issuance financing). It is just that in the past, they used projects to raise funds, but now they use virtual land, real estate, game props and digital collections to raise funds. In essence, they are illegal fund-raising.

“The supreme law recently issued a new judicial interpretation on the crime of illegal fund-raising, which also provides legal support for combating such crimes. As the public, we must keep our money bag, have a clear and objective understanding of the field of our investment, give up the idea of getting rich overnight, polish our eyes and stay away from the capital market.” Liu Yang further warned.