In just one year, “metaverse”, which replaces the “Ai industry” in the capital outlet, should not expect that the “ideal country” outlined in the early stage has been disillusioned in reality with the downturn of financial reports and the sharp decline of stock prices of many metaverse attribute companies.

The AI industry that gave way from the tuyere may not have thought that, with the successful display of science and technology of Beijing Winter Olympic Games, it has become a platform for domestic AI enterprises to show their achievements, and once again pushed those AI enterprises seeking commercialization and technology products to the attention of the public.

So, can AI companies who stand at the tuyere again avoid the lessons of the collapse of metaverse story?

01 “metaverse” and “Ai +”, the “two poles of emptiness and reality” from the same source?

On the day of the release of the financial report, meta’s share price plunged 26.4%, and the total market value evaporated about US $252 billion (about 1602.8 billion yuan) in a single day, the largest one-day decline since the company was listed in 2012. 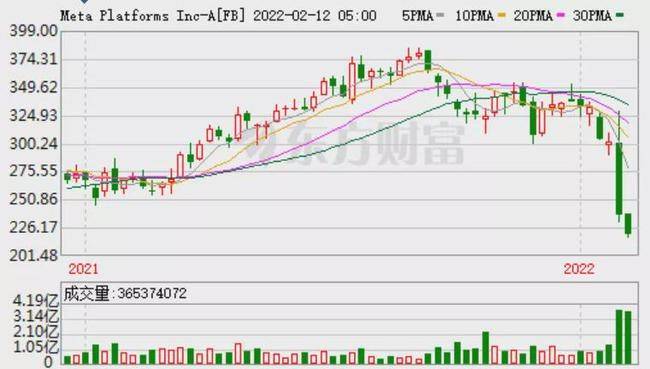 Misfortunes never come singly. On February 15, the first share of metaverse roblox Q4 reported that the company’s Q4 operating loss reached US $140 million, more than double that of the same period last year; The net loss attributable to common shareholders was 140 million yuan, a year-on-year increase of 144%, with a total loss of 25 cents per share. After the financial report was issued, roblox’s share price fell 15% in after hours trading in the secondary market.

At the beginning of 2022, the share prices of many companies involved in metaverse attribute fell together, which makes people wonder what to do for AI + technology companies that have just found a “new story” after going down the wind? For example, Shangtang technology, the first of the four domestic AI dragons to make a successful IPO, once mentioned metaverse 47 times in its prospectus, perhaps to stabilize its overvalued value after “bleeding listing” with “metaverse”.

On the tuyere, you sing and I come on stage. Both metaverse and AI + will be the only way for mankind to move from carbon based to silicon-based. According to their “silicon-based” properties, they all produce homology, but they are also different.

As a new concept, “metaverse” is more similar to “virtual axiom”. The grand, cutting-edge and futuristic scenes presented are difficult for current technology companies to break through and realize in a short time. Its value and project highlights come from “nothingness”, which is more inclined to “hypothetical” scenes. They do not exist in the real world, and are naturally full of uncertainty and risks in collision with reality.

“Ai +” as a concept that has been developed by technology companies for decades, has moved from “nothingness” to technology explosion and product scene landing. From face recognition, urban security systems, smart buildings, smart venues, AI robots and so on are changing contemporary people’s lives to bring convenience and practicability.

For human beings, the perceptible progress of science and technology in the real world is more important and practical. After all, when the content of “silicon-based” in the real world is insufficient and the problem solution is still carried out in a clumsy way in ancient times, how can people believe the infinite possibilities in the copied “virtual world”?

This explains why metaverse has ushered in its own “disillusionment period” in only one year. On the other hand, AI + enterprises will meet people’s illusions about the near future with the convenience and sense of science and technology generated by technology in a large-scale global event similar to the Beijing Winter Olympic Games, which makes them return to the outlet of capital and leads to another round of investment boom.

Therefore, similar to domestic technology companies focusing on AI research and development, such as Kuangshi and Shangtang, the misfire of “metaverse” may make it lose its overestimation in the virtual concept, but it will never affect its influence based on the real world. Instead of wavering between “virtual value” and “long-term value” brought by pragmatism, accelerating the fit between self technology and real-world infrastructure may usher in a wave of self high growth.

For most people, only when they can see and touch can they feel at ease; For investors, the same is true. No investors expect their return on investment to be too long.

02 is the long-term value of “calming” Ai + technology company a standing capital?

In contrast to the fire in metaverse industry last year, AI + companies represented by AI four little dragons such as Kuangshi and Shangtang in China have moved towards a period of “weak story + heavy product”, which makes the AI industry look calmer than metaverse’s gushing stories and concepts, which raise the expectations of investors.

At present, the more the outside world calms down about the industry, it means that the AI + industry has passed the expectation expansion period, is experiencing the bottom period of disillusionment, is moving towards the climbing period of enlightenment, and has reached the plateau period of maturity. As the CEO of Kuangshi said, AI has entered the deep-water stage of the industry and entered the “valley of death” after the rapid outbreak from 2016 to 2017. It is difficult to predict which AI enterprise can pass through this “valley of death”.

Indeed, the new players represented by the AI four dragons will be criticized for many things, such as huge investment and huge losses.

However, for any new technology R & D track, it is understandable to invest a lot of money in talent recruitment and R & D in the early stage. After all, R & D funds are the material and driving force of technological breakthrough, which also proves the technology accumulation, scientific and technological heritage and future potential of these enterprises.

This also indirectly proves that under the consumption of a large number of resources, there may be a few domestic enterprises that can cross the “valley of death” and stand on the plateau.

1. The growth rate of domestic AI industry is at the leading level both in the general environment and in the sub circuit.

The data research center of the Chinese Academy of information and communications once estimated that the scale of the domestic artificial intelligence industry in 2020 was 303.1 billion yuan, with a year-on-year increase of 15.1%. Both the market volume and growth rate are in the first echelon in the world.

On the subdivided track, the computer vision field of AI four dragons represented by Kuangshi and Shangtang is one of the most important fields of artificial intelligence, and the industry has a good development prospect in the future. According to Sullivan report, computer vision software accounted for 46.9% of the total AI software market share in 2020. From 2020 to 2025, the market scale will increase from US $14.3 billion to US $68 billion with a compound growth rate of 36.6%.

2. In the primary market and secondary market, the trend is still “good”.

In the secondary market, Shangtang technology, which officially landed on the Hong Kong Stock Exchange on December 30, 2021, increased by more than 20% on the first day of listing, and once reached the highest share price of HK $9.7 on January 4, 2022. Now the market value of the company remains above HK $200 billion.

This is also the first proof of the popularity of AI technology companies in the secondary market for Kuangshi technology, which passed the IPO of A-share science and Innovation Board last year.

3. The technical strength of AI technology companies such as AI four dragons, Hikvision and iFLYTEK is “internationally recognized”.

From October 2019, Kuangshi technology, Shangtang technology, Hikvision, Dahua Technology and iFLYTEK were listed in the “entity list” by the U.S. Department of Commerce, limiting the supply of high-end GPUs and special processors required by domestic players.

However, for the current “famous” players, strength is the basic condition for survival. If you want to come out, you still need to study how to develop your “long-term value” and “business operation ability”.

First of all, “long-term value” represents the technology monopoly period. If the early R & D investment can obtain a practical and easy-to-use AI product, the subsequent cost recovery is actually only a matter of time.

At present, each company has very representative products. For example, sensemars of Shangtang technology has become one of the largest metaverse enabling platforms in Asia, and the open vision technology city aiot operating systems “Kunlun” and “Pangu” and the human-computer collaborative interaction system of Yuncong technology.

Secondly, how to conduct business operation after having core technology is also what AI four dragons and other AI enterprises lack at present or necessary in the future. As Li Kaifu said in AI · the future: today’s AI no longer needs Nobel level innovation, but commercializes and creates real value from existing technologies.

This is also a potential trend in the future. As Gartner pointed out, it is expected that by 2025, half of the world’s enterprises can apply AI to the daily operation stage of enterprises, not just for testing. This also confirms the previous mentioned that AI + is “advanced + change” the real world.

However, to commercialize and commercialize the existing technology means that AI companies need to “put the technology into practice”. They need to accelerate the combination of their own technology and the real industry, and can not be limited to a single field. This also means that AI companies should change from “focusing on software” to “software + industry”. Once the software and hardware are combined, there will be more installation, service and other costs, which also means that the gross profit margin will drop significantly.

However, this is the only way for all AI technology companies to arrive as soon as possible. After all, “talking on paper” is empty talk after all. Only by implementing technology and changing society and life with technology can we prove our own value, accelerate our own “commercial” operation and make enterprises “self-sufficient”.

Just like the past Beijing Winter Olympics, “science and technology Olympics” has become a highlight. What supports it is the application of a large number of emerging technologies and solutions such as AI and carbon emission reduction developed by these domestic science and technology enterprises; Like Kuangshi technology, which takes AI technology as the fulcrum and integrates AR technology, it provides accurate positioning and on call “intelligent guide” service for on-site audiences, so that audiences from all over the world can experience the changes in China under the “rejuvenating the country through science and technology”, and further make the companies behind these technologies more concerned and understood by more people.

As can be seen from the example of the Winter Olympics, the 14th five year plan issued in 2021 and the central spirit put forward the importance of paying attention to the real economy and digital transformation at the same time.

No matter Kuangshi, Shangtang, Cambrian and iFLYTEK, these AI + enterprises are surging forward in the torrent of the times, becoming the mainstay in the development of China’s artificial intelligence, the winner of the dividend of the times and the undertaker of the transformation mission of the times. Who can adapt to the times and make the AI industry from “untouchable” to “everywhere” and “readily accessible”. Maybe he is the person who stands on the “Plateau” of the AI industry after the “valley of death”. (Morgan channel)