After paying off 600 million debt, Luo Yonghao wants to kill back the field of science and technology. This time, he aimed at metaverse. Can Luo Yonghao “burn” in the next industry through the fire of thinking technology?

“I just work hard and try my best to be myself. As a result, many of my peers will go bankrupt. Life is really cruel.” On March 20, 2013, Luo Yonghao sighed on his microblog.

He did not expect that this sentence was like a dark cloud. In the next few years, whenever he encountered twists and turns in his industry, he would float out and rain on his head.

Not long ago, Sydney, Weiya and other anchors with goods on their heads were investigated for tax evasion, and the live broadcast account was closed. Li Jiaqi then submitted a rectification report to Zhejiang Consumer Protection Commission and stopped selling a batch of goods.

Although Luo Yonghao’s company to make friends responded to “we have no problem” at the first time, Luo Fen secretly worried about it until the tax bureaus in Beijing, Shanghai, Zhejiang and Guangdong announced that taking the initiative to report error correction before the end of this year could be reduced, mitigated or exempted from tax punishment. Luo Fen was finally relieved, Passers-by feel that “industry dark lamp” is sincere and does not deceive me.

“Industry dark light” is a nickname of netizens about Luo Yonghao’s entrepreneurial experience, and he has also been certified. In February this year, Luo Yonghao tweeted that he played in the clubhouse for two days and didn’t stay in a room for 10 minutes. “Well, I’m a dark light. Everything I’m optimistic about will go bankrupt, and everything I don’t see will go well.”.

When Luo Yonghao was a sophomore in high school, he dropped out of school because of his outstanding personality. After reading idle books at home for three or four years, he began to wander around. First, he set up a stall to sell old books, then backed up, poured medicinal materials, made futures and sold computer parts… Until he was 28, he heard that when he was a teacher in Xindong, which was at the height of the sun at that time, he could have a “million annual salary”, so he wrote a cover letter to Yu Minhong, Finally, I started my first reliable career – New Oriental English teacher in 2000. Life is full of drama. Now, like Luo Yonghao, Yu Minhong “goes to the sea” to sell goods live. Of course, this is all later.

During his teaching in New Oriental, Luo Yonghao was deeply loved by students because of his humorous teaching style and personalized remarks. The video clips of his lectures were sent to the Internet by students, which also aroused the pursuit of some young people. Lao Luo began to “go out of the circle” in a small range and became the first generation of online popularity. His passages were also compiled into a collection, known as “Lao Luo’s quotations”.

Luo Yonghao said, “a tough life doesn’t need explanation”. In 2006, he left New Oriental. At that time, the blog was popular, “public knowledge” was still a commendatory word. Luo Yonghao homeopathic founded Niubo. He planned to select more than 100 opinion leaders at that time to contribute to the website, including writers Han Han, Feng Tang, economist Xue Zhaofeng, Wang Xiaobo’s wife Li Yinhe and so on.

Luo Yonghao, who has a prominent personality, also made six rules for Niu Bo: if you want to be able to write by yourself, you can’t be like Li Yuchun; You should have something to say, not like Xu Jinglei; Don’t plagiarize. If you accidentally plagiarize, you should know how to apologize, not like Guo Jingming; Can be rich, but not as annoying as Pan Shiyi; Not like Kong Qingdong; Be kind, don’t fall into a well, the most important thing is to write an article.

Some people say that Niubo is Luo Yonghao’s Utopia of idealism, but Niubo doesn’t make money at all. There are only three regular employees. However, Luo Yonghao began to return to his old business and set up “Lao Luo English training” and hoped that “after making money, we will hire a professional editor for Niubo, 100000 a year.”

Before the professional editor was invited, Niubo was closed. Fortunately, Lao Luo’s English training office was quite successful. But how can an idealist be content with this? After making some money from his old bank, Luo Yonghao started a new round of trouble and founded hammer technology in 2012.

Many people are familiar with the following stories. Luo Yonghao may be a good teacher, a good Internet celebrity, or even a successful “opinion leader”, but he is hardly a good boss. He has a prominent personality, arbitrary and independent. Everyone is working hard. 996 is the norm of the company. Many people turn to him because of their ideals, but they are scolded because the water pipe turns on hot water in summer. Luo Yonghao will smash Siemens refrigerators in order to lead the public to protect their rights. He will also smash employees’ computers because he is not satisfied with the design.

Under Luo Yonghao’s operation, the mobile phone was very good, but the company fell down and carried 600 million debt. After that, he tried to join in e-cigarettes, but Ono e-cigarettes just announced the “double 11” sale, and the Internet channel of e-cigarettes was stopped. Now, in the face of policy tightening, he didn’t make much splash in the end.

He had to bow to life, no longer talk about ideals, chose the live broadcast of “quick money”, put away his personality, committed himself to unfamiliar fields, listened to the suggestions and arrangements of his colleagues, and finally achieved success. He not only “made a friend” became the live broadcast head brand, but also gradually paid off the debt of 600 million yuan.

Some people say that Luo Yonghao is the “dark light of the industry”. The teaching and training, blog, e-cigarette and live broadcast he once chose have been impacted and even “cold”. However, others say that Luo Yonghao is the “bright light of the industry”. Whether it is teaching and training, mobile phone or live broadcast, he once stood at the tuyere, but Luo Yonghao went in late or didn’t stand firm in the track.

Luo Yonghao himself is very open-minded. He lives and tosses. “The dream of not being laughed at is not worth realizing.” After paying off the debt by live broadcasting, Luo Yonghao opened his technology dream again.

“If it weren’t for the debt owed to others, I would never consider making money as the first consideration in starting a business. Creating value for the society, making the world better and promoting human progress… Only such things can give me continuous and long-term motivation and support me to work 15 hours a day.” In July this year, Luo Yonghao predicted his ideal on his microblog and announced that 600 million debt would be paid off.

Then on December 9, he forwarded an article by Xu Wu, the founder of cat’s eye film and angel investor, to express some views on metaverse.

According to the article, metaverse is a concept, not an opportunity. The exhibition of new computing devices brings opportunities. Depending on the progress of hard technology, the development of VR and AR will take ten years, but will eventually move towards the mainstream market with billions of users.

A week later, Luo Yonghao tweeted again, “in order to welcome the next high-tech entrepreneurship, I have listened to hundreds of special American talk shows on the treadmill… Come on, Xiao Luo, you can still be a cow for 11 years”. 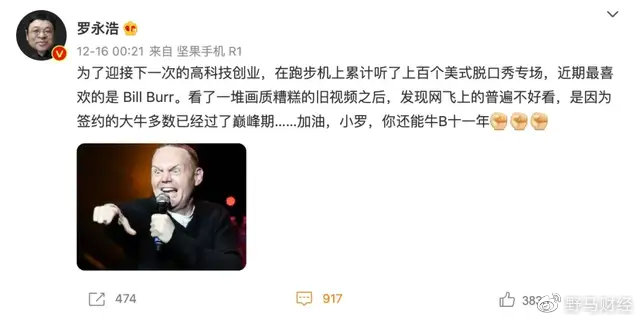