It’s not uncommon to buy a mount in world of Warcraft and a skin in the glory of the king.

But have you ever thought about spending tens of millions of yuan on “a piece of land” or even real estate development in the virtual world? 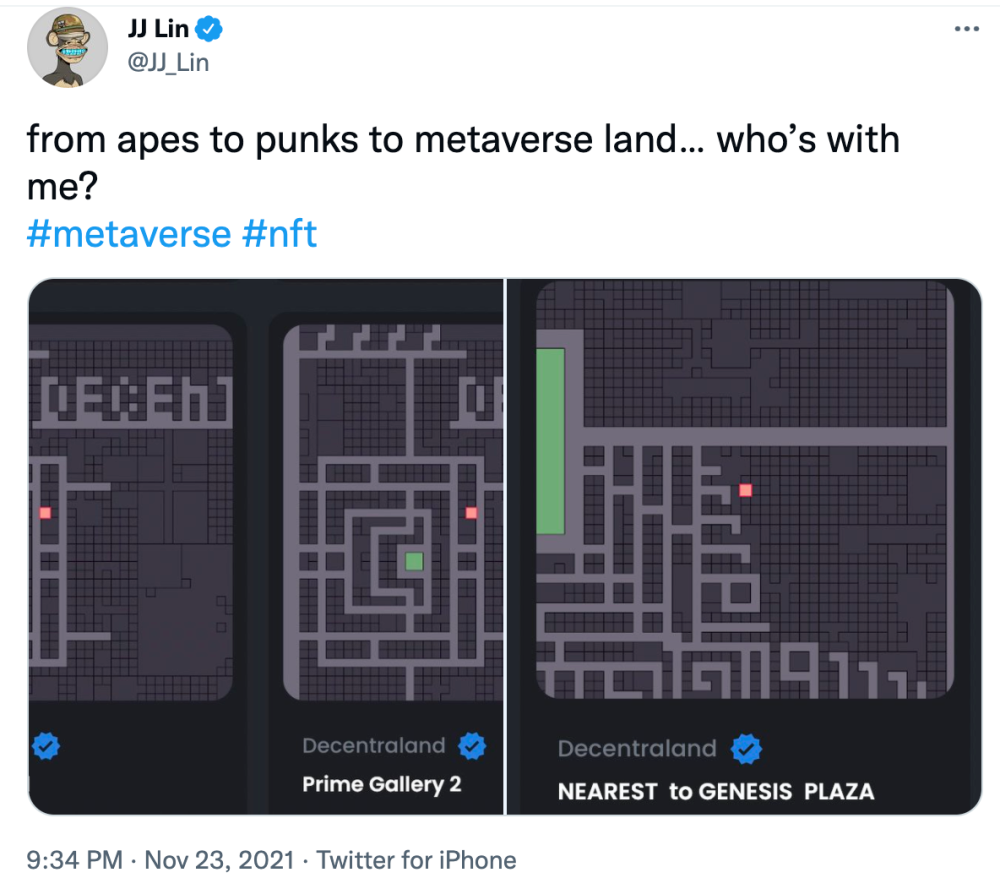 The recent real estate market is not hot. But in metaverse, outside the real world, real estate is booming.

This price is slightly higher than the average single house price in Manhattan. The buyer of this digital land is metaverse group, a subsidiary of digital asset investment group tokens.com, which said it would use this land to expand the digital fashion industry.

The price is not only expensive, but the area of this virtual land is still very small. The key point is that this land is “virtual” and non real world land!

Caimao understands that the above plot is located at No. 116 “fashion street estate” in “decentraland”, covering a total area of 52.5 square feet, which is only 4.877 square meters converted into square meters (1 square foot ≈ 0.09290304 square meters), and the floor price is as high as 3.18 million yuan / square meter.

Compared with the house prices in domestic first tier cities, the price of the above virtual real estate is also equivalent to the price of a Baiping house in Beijing Third Ring Road, Shanghai inner ring road, Shenzhen Futian and Guangzhou Pearl River new town.

In fact, this is just a case that people pay attention to because the transaction price is high, but in decentraland, the transaction volume in one day is far more than expected! 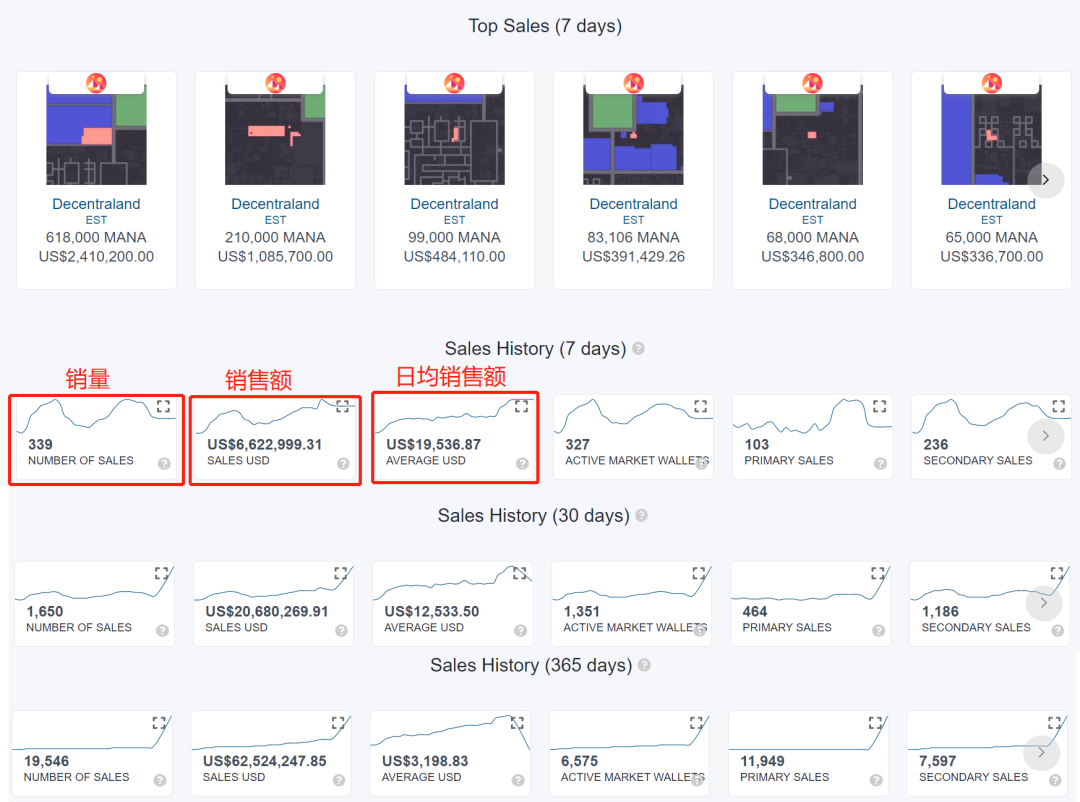 Many people are expected to have this doubt. Why can a virtual plot be sold for tens of millions of yuan? How incredible is it, or is it a large-scale leek cutting game?

But if metaverse can really become a second life, is it understandable to spend some money to live in a big house and even make a profit in real estate speculation?

How hot is the virtual land?

Everything can be metaverse.

A very magical phenomenon is that everyone knows the new term “metaverse”, but it can not be explained thoroughly in normal language. However, “virtual real estate transaction” is gradually becoming a trend abroad, so it is necessary for us to talk about the relationship between metaverse and real estate.

Taking the virtual world platform decentraland mentioned above as an example, decentraland is a popular project in the concept of metaverse. With “land” (virtual land) as the main trading asset, decentraland gradually stands out among many metaverse projects.

Statistics show that decentraland, founded in September 2017, is a virtual reality platform driven by Ethereum blockchain and the first completely decentralized virtual world owned by users.

At 22:00 on December 10, 2018, decentraland officially opened a new scene of “virtual real estate transaction”, that is, land auction.

Since then, the “virtual real estate transaction” has become increasingly active. Even on November 23 this year, the famous singer Lin Junjie shared the news of settling in metaverse and buying “virtual land” on twitter. It is reported that Lin Junjie has purchased three virtual lands in the cryptocurrency market decentraland.

It can be understood that in the virtual world built by decentraland, people can buy virtual land to build their own houses or cities and visit other people’s buildings. At the same time, they can also buy ready-made buildings, equipment and other application items in the “market place” of the virtual world.

Different from the ordinary Internet virtual world, all property rights and transactions in decentraland have traces to follow, which means uniqueness, privacy and ownership.

At the same time, land is a rare asset that participants resell, which is equivalent to a virtual digital asset. It has only fixed coordinates (x, y) and corresponding owners. Therefore, the price may rise in several resells.

The following figure shows the latest land transaction as a case. The transaction volume of the virtual land traded at 17:17 this afternoon was US $21447, but the virtual land was only US $113 when it was first sold at the end of 2017. After five resells, the price increased 214 times.

It’s much easier to earn than real land speculation. 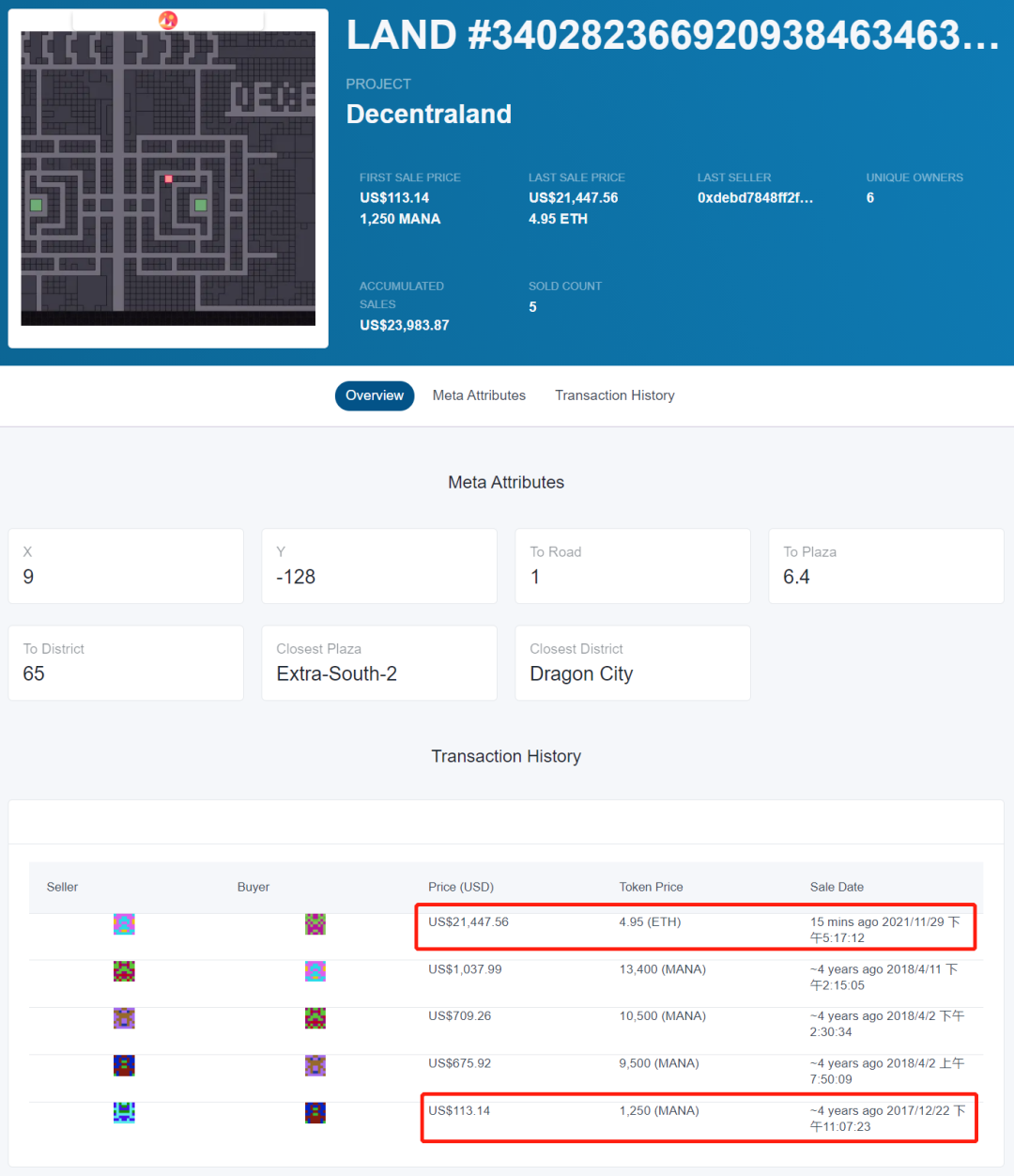 Frankly speaking, the virtual land was only worth 721 yuan four years ago, but today it has been sold for 136900 yuan.

Of course, not all virtual land transactions are profitable. 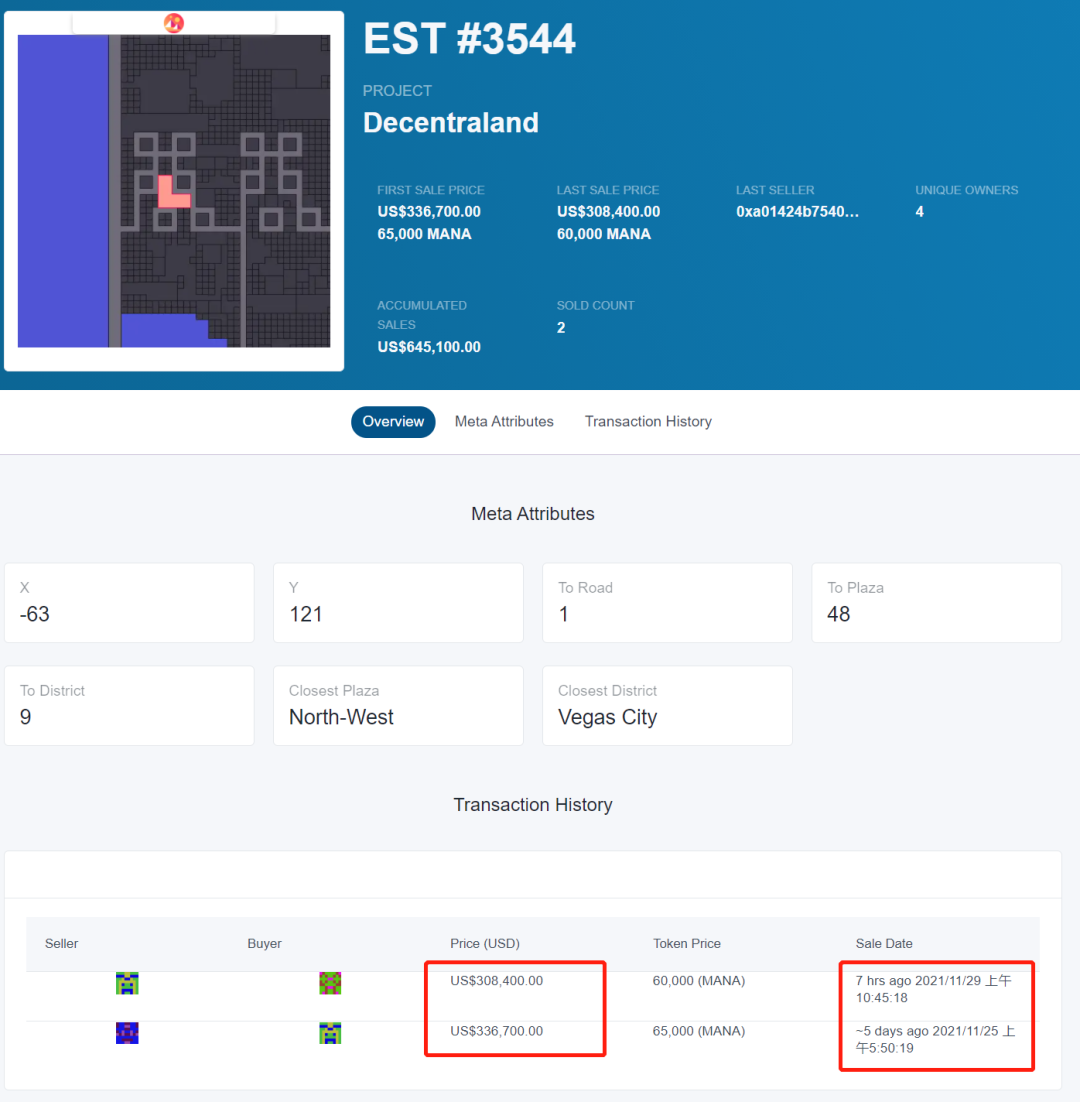 Undoubtedly, the price of this virtual plot is hyped up. Even in the Metaverse world, housing prices are still like “ceiling”, you can imagine how big the bubble is.

However, some participants said that the purchased virtual plots, as digital assets, should be passed on to future generations. In their eyes, there is still room for appreciation of these assets in the future.

Metaverse has only been popular for a few months, and has ushered in several milestones of major global events.

A while ago, Zuckerberg renamed facebook “meta (metaverse)”, setting off a boom in the concept of metaverse. Later, the South Korean government released the first metaverse five-year plan for South Korean local governments (2022-26).

In South Korea’s metaverse five-year plan, its total investment is expected to be 3.9 billion won, but it is ridiculed by the South Korean group that “3.9 billion won is only equivalent to the house price of a 100 Ping apartment in Jiangnan area of Seoul. It’s a bit of a joke to regard this as a long-term investment plan.”

Like China, the issue of “high house price” has become the focus of people’s attention. With the emergence of metaverse concept, the fire has also burned to the domestic real estate industry.

For example, some time ago, the topic of “post-95 couples in Shanghai bought a set of virtual real estate as a marriage house” made many people sigh that the pressure to buy a house is so great that young people don’t want to be house slaves and buy virtual real estate “self comfort”.

screenshot from the official website of Touli real estate

Toulifu is a real estate businessman with a little soil. In order to make everyone have a home without suffering from baldness, his toulifu real estate company built a large number of buildings with strange chicken materials and philosophical construction methods, and gradually formed a magic city full of local cyberpunk flavor – Touli city. There are free flying buildings, a wide variety of foot therapy and health care, 8g network that can teleport physically, and all kinds of absurd businesses that try their best to make a lot of money. In short, it is a “welcome to bald city”!

From the introduction of this paragraph of about 159 words, it will feel incredible and interesting, but it is these virtual “real estate” that caught fire in the creation festival of a treasure in July this year because of the artistic design and the concept of digital real estate. 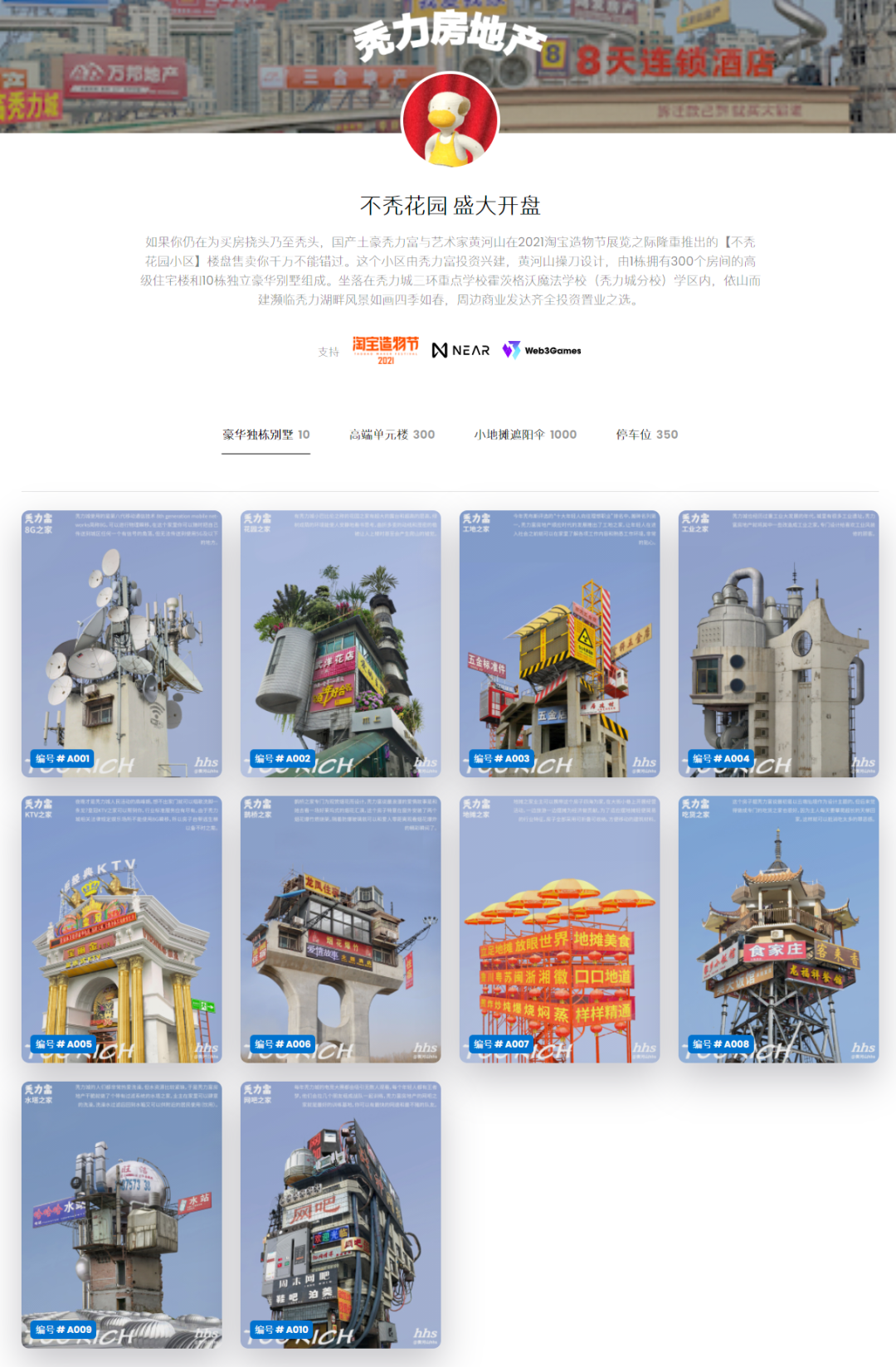 screenshot from the official website of bald real estate, the project of bubald Garden

It is learned from a treasure that at present, the bald Lifu real estate has been sold out, and the price is basically more than 10000 yuan / set. The most expensive twin towers are priced as high as 990000 yuan! Moreover, the buyer can also obtain a real estate certificate, which can be used as the sole verification.

Seeing here, we can generally understand that what bald Lifu real estate sells is only a pioneer art. It is marked as “NFT digital encryption real estate” on the official website, which is different from the land sold by decentraland mentioned above.

According to the introduction on the official website, the encryption of “NFT digital encrypted real estate” is simply understood as copyright ownership encryption by uploading art works to the blockchain. This uniqueness value is called NFT (non homogeneous token). The advantage of NFT is that the “smart contract” in the blockchain can clearly record any circulation record and display the holder.

This exclusive sense of ownership is one of the key points for the popularity of NFT art collection.

Many people may ask, what’s the use of spending money on this virtual real estate? First, digital assets. Second, they are liquid and can be bought, sold or even appreciated.

If you can have a good life in the “second life”, can you spend money to “buy a suite”?

In the past, people regarded gold and real estate as “hard currency”. Under the impact of metaverse concept and virtual real estate, will there be a wave in the real estate market in the future?

But from another perspective, even if you go to metaverse, you may not escape the fate of buying a house.