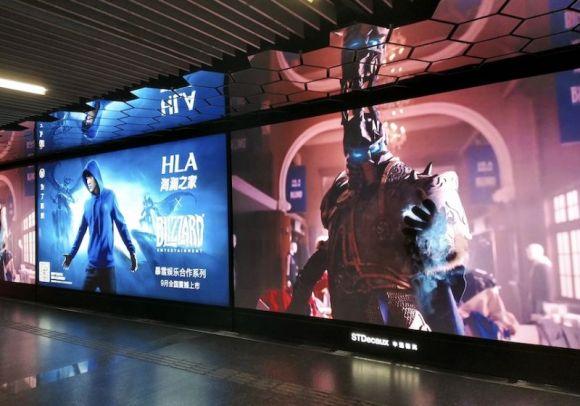 “Leather goods” and “25 kinds of clothing, shoes and hats”, the current trademark status is “trademark application”. However, against the background of cooling down the concept of “meta universe” in the capital market, the news of Hailan house did not cause significant fluctuations in the stock price. On November 26, Hailan house closed at 6.35 yuan / share, slightly down 1.24%, with a total market value of 27.429 billion yuan.

On November 26, the reporter of Huaxia times learned from relevant people of Hailan home that this is not the first time that Hailan home has set foot in the meta universe. Previously, Hailan home had cross-border cooperation with the mobile game Jedi survival: stimulating the battlefield and the first super realistic digital person ayayi in China.

If setting foot in the yuan universe is the “upward exploration” of Hailan home for the future, then adhering to the third and fourth tier cities and actively improving the market share in County cities is the “downward search” of Hailan home. After UNIQLO publicly announced that it had entered the sinking market, can the “national brand” Hailan home still sit?

Getting involved in the meta universe is not just a gimmick?

“Hailan’s house is a man’s wardrobe.” the concise and popular advertising language has made a reputation for Hailan’s house. But what Hailan family wants to do is not just men’s business. Public information shows that at present, Hailan home has many brands, including Hailan home (men’s wear), ovv (women’s wear), boys and girls (children’s wear), San Keno (professional wear) and Hailan preferred life hall (life home).

In the future, Hailan home may do business in the yuan universe. On November 18, Hailan Home Brand Management Co., Ltd. applied for the trademark of “Hailan home yuanuniverse”, which is internationally classified as “18 categories of leather goods” and “25 categories of clothing, shoes and hats”. The current trademark status is “under trademark application”.

On November 26, a relevant person of Hailan home introduced to the reporter of Huaxia times: “on October 25 this year, Hailan home cooperated with Alibaba’s Metahuman and ayayi, who is also the digital manager of tmall’s super brand day, to pay tribute to China’s aerospace spirit.”

There will be more possibilities between enterprises and the meta universe in the future. “Enterprise metauniverse” is a concept proposed by Microsoft CEO Satya NADELLA in May this year. He said: “You can start with digital twins and build a rich physical or logical digital model, which can span people, places, things and their interactions, whether it is assets, products or complex environments. Digital twins bind the physical world in real time. You can use mixed reality to monitor and collaborate in the environment.” In short, this means that it will be possible for enterprises to replicate the changes simulated in the virtual world in the real world.

Although it is still in its infancy, enterprises have made similar attempts. This year, Gucci’s Centennial Exhibition Gucci Garden: archtypes is not only held offline in the Lord’s Square in Florence, Italy, but also in roblox The online game creation platform held an online virtual exhibition. It is worth mentioning that previously, rob Roth players spent 350000 robux (the currency on rob Roth, which can be converted into real currency, about US $4115) to buy a limited edition Gucci virtual package.

Referring to the motivation of Hailan home to set foot in the meta universe in the future, the relevant person of Hailan home told reporters, “the exploration of Hailan home in the meta universe again and again has brought new inspiration to industrial digitization, giving designers, enterprises, digital fashion and digital economy a deeper understanding.” The source said that as a leading Chinese garment enterprise, Hailan home embraces the hot spots and opportunities of emerging things such as yuanuniverse, accelerates the digital transformation process of the textile and garment industry, and leads the digital innovation and development of the industry.

It still needs time to explore the real linkage with the meta universe. Back to the real market, Hailan home has to face a fierce competition pattern. UNIQLO recently announced that it will enter the third and fourth tier cities, which undoubtedly means that Hailan home will have a “frontal confrontation” with it. It should be noted that, from the outside world, Hailan home still has many problems to be solved.

The high inventory data is also due to the business model of Hailan house. On November 26, Li Yingtao, senior analyst of Analysys new consumption, analyzed in an interview with the reporter of Huaxia times that Hailan house adopts the mode of joint operation with suppliers. “While sharing profits with suppliers, they also share risks with them.”

From the above data, Hailan home will lengthen the payment period to upstream suppliers and shorten the accounts receivable period to downstream franchisees and associates, so as to ensure sufficient cash flow of the company. As a comparison, in the same period of 2020, the turnover days of accounts receivable and accounts payable of Senma clothing were 39.84 and 78.31 respectively. From 2018 to 2020, the net cash flow from the operating activities of Hailan house was RMB 2.419 billion, RMB 3.462 billion and RMB 2.83 billion respectively.

On the other hand, Li Yingtao pointed out that high inventory is not only a common worry for garment enterprises, but also the biggest business risk. However, around 2012, the emergence of vipshop and online “double 11” and other special sales activities provided inventory output channels for clothing enterprises such as Hailan home. At the same time, offline outlets and other discount stores are also one of the channels to clear inventory.

Li Yingtao pointed out that UNIQLO and Hailan home belong to the “quality parity track” and “at the same time, this track has become saturated.” by the end of September 2021, Hailan home had 7537 stores nationwide, a net increase of 156 compared with the beginning of the period. At present, UNIQLO has more than 820 stores in Huamen. “At present, Hailan home has done very well in this track, and the number of more than 7000 stores across the country has become saturated. UNIQLO will be its biggest competitor in the future,” the above person added.

In the first three quarters of this year, Hailan home recorded a revenue of about 14.16 billion yuan, a year-on-year increase of 20.19%; The net profit was about 2.05 billion yuan, a year-on-year increase of 58.7%. However, Hailan home pointed out in its financial report that the high growth was attributed to the decrease in sales caused by the epidemic in the same period last year. Compared with the revenue of about 14.69 billion yuan and the net profit of 2.62 billion yuan in the same period in 2019, it decreased by about 3.6% and 21.8% respectively.

Revenue growth is blocked, and Hailan home may bet “treasure” on multi brand development and brand upgrading. At present, Hailan home has a number of other category brands, including customized clothing brand “San Keno”, boutique women’s clothing brand “ovv”, home brand “Hailan preferred”, etc. It is worth mentioning that, in addition to the main brand of Hailan home, St. Keno contributed the most revenue. In the first three quarters, St. Keno contributed about 1.48 billion yuan to Hailan home, while other brands contributed about 1.29 billion yuan in total.

“At present, the main goal of Hailan family is to develop upwards.” Li Yingtao thinks, “on the one hand, Hailan family can choose to take the route of brand upgrading, such as creating Hailan preferred home brand; on the other hand, it can refer to Anta’s acquisition of FILA to take the route of in vitro incubation.” however, the “Aiju rabbit” brand created by Hailan family has not achieved good results. It is reported that, The brand is the female version of Hailan home.

On November 26, relevant people of Hailan home told reporters that in terms of offline layout, Hailan home proposed the plan of “stable development and increasing floor efficiency” of stores. On the one hand, adjust and optimize the existing stores, and adjust individual stores with poor benefits and overlapping customer coverage; On the other hand, expanding stores around the core location of shopping centers and shops. At present, HLA has in-depth cooperation and rapid expansion with national systems and regional strong systems.

It can be predicted that there will be some positive competition between Hailan home and UNIQLO in the sinking market of second and third tier cities in the future. When the reporter asked relevant people of Hailan home how the company viewed UNIQLO’s entry into the sinking market and regarded Hailan home as a competitor, the other party said it was inconvenient to answer.